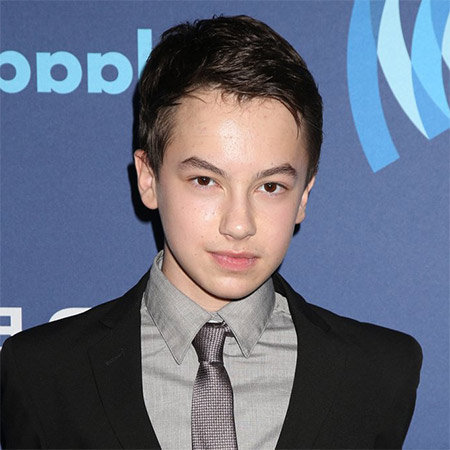 Early Life He spent his childhood in Littleton Colorado before shifting to Los Angeles with his family. Hayden has a younger brother. The main reason for the relocation was for Hayden to pursue his acting career. Before starting his career he developed his interest in acting by imitating and reciting the lines of his favourite film and television characters. As he came to Los Angeles, he gave an audition and the eventually was selected for his first television debut in Zeke and Luther in 2011. He also did  his film debut with a starring role as Nathan Vales in the horror movie 11/11/11 in the same year.

Career Before 'The Fosters'

After his first television debut in Zeka and Luther and film debut in 11/11/11, he took a recurring role on the NBC comedy series Parenthood in 2012. He portrayed the role of Micah Watson, a wheelchair-bound by with spina bifida who becomes the best friend of Max Braverman (by Max Burkholder). Alongside with his acting career, he started to work as a voice actor. The did voice-over in the video games Call of Duty: Black Ops II and Lightning Returns: Final Fantasy XIII. The voice of Prince Gustav on the Disney Channel animated series, Sofia the First was also given by Hayden in the same year, 2012.

Role for the 'The Fosters'

Hayden Byerly started the role of Jude Jacob-Foster in 2013 in the critically acclaimed ABC Family drama series, The Fosters. On the series, Hayden Byerly plays as an abused and sensitive 12-years-old foster child who is subsequently adopted into a large blended family. After meeting Connor he begins questioning his sexuality as he develops different feelings for his best friend Connor. Hayden in the year 2014, was listed on "Favourite LGBTQ Characters on TV' and named as 'heartwarming' for the character of Jude by Hollywood.com.

Then on March 2, 2015, an episode of 'The Fosters(Now Hear This)' was aired on ABC Family. The main highlight was Hayden's character and Gavin's character sharing a kiss, which is believed to be the youngest LGBT kiss ever in U.S television history.

Award for the 'The Fosters' Role

Hayden Byerly, as Jude Foster portraying a bisexual role, has been criticised a lot. Both stars Hayden Byerly and Gavin MacIntosh were subjected to be gay in real life and were asked about their gender. But this stars won the TCA Award for Outstanding Achievement in Youth Programming for the show, which beat out Tiger's Neighbourhood, The Legend of Korra, Sesam Street and so on.

Hayden has also initiated an organization named Hayden's Hope Totes which provides duffle bags to the needy. Hayden Byerly along with his Fosters co-star Gavin MacIntosh joined the anti-bullying campaign raised $20,000. Hayden became an outspoken advocate for the 'Be Good to Each Other' campaign which was found in 2006. He encouraged young people to accept their differences.

Heyden Byerly is very much motivated and dedicated towards his work and with no doubt, his whole family must be very much proud of him. This rising star seems to be more focused on his career right now so there is no any record of him dating. And of course, he does not seem gay so he will surely be dating beautiful girl soon.

Apart from movies he is also very much interested in reading  a thriller  and action-adventure books and solve advanced math problems. Moreover, basketball and video games are also in his hobbies.

Hayden Byerly with Call of Duty:Black Ops II and Zeke and Luther made his .05 million fortune. His exact net worth is not yet known. Beside that Hayden is very much popular in social networking sites like Twitter and Instagram. He is active in his uploads and tweets. HIs total fan followers are 93.8 thousand in Twitter.