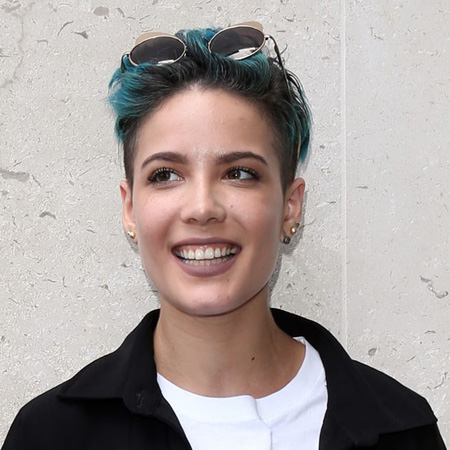 Ashley Nicolette Frangipane, known by her stage name, Halsey, is an American songwriter-singer, well known for her hit album, Badlands which appeared to be an enormous commercial success.

Halsey was born on 29 September 1994 in New Jersey, U.S. Halsey was born to Chris Frangipane, manager for a car dealership and Nicole Frangipane who works as security personnel in a hospital.

Halsey has two younger brothers along with her named Dante and Sevian. She is of Hungarian and Italian descent on her mother side and from father's side African-American and a bit of Irish ancestry. She has a mixed ethnicity and holds an American nationality.

In her early days, Halsey played the viola, cello, and violin, until she moved onto the acoustic guitar when she was fourteen years. When Halsey was seventeen, she was diagnosed with bipolar disorder.

Halsey also attempted suicide which made her hospitalized for seventeen days. After completing her high school, Halsey joined Rhode Island School of Design and later decided to enroll in community college, realizing that she cannot afford tuition.

Later, Halsey was dropped out of college, and even got kicked out by her parents, so she lived in a basement with her friends, who she called 'degenerate stoners.'

In 2014, Ashley toured with The Kooks during the development of her debut studio album. At that time, Halsey started an on-off love affair with Norwegian producer Lido. On 27 October 2014, Halsey released her debut extended play album, Room 93.

Halsey's debut studio work, Badlands was released on 28 August 2015. She co-wrote every song on the album, whereas production was controlled by a number of producers including her boyfriend, Lido.

Ashley made her appearance on the song named 'The Feeling' with Justin Beiber in his fourth album, 'Purpose.' The song entered top forty of the Billboard Hot 100 and also achieved certifications in countries such as the United Kingdom and the United States, though the song was not released officially.

Halsey's Net Worth And Earnings

Halsey earns a decent amount of money as a songwriter and singer, who is well known for her numerous hit songs including, Closer, Now or Never. As of 2019, her total net worth is estimated to be $5 million according to celebrity net worth.

Halsey is not married yet but the singer is dating her boyfriend rocker Yungblud. With their romance, the couple went public at the beginning of 2019, after much speculation. The two together joined the forces of their song 11 Minutes too.

The artist was in a relationship with G-Easy. Lots of rumors were around when they were spotted together on several occasions. However, they denied the story and said their relationship is good as friends.

Later, it seemed as Halsey and G-Eazy's friendship took another turn, while they were performing together at a show, they both kissed each other.

Previously, Halsey was in a relationship with her ex-boyfriend Lido. The couple began dating from 2013 and ended up after three years in 2016. It was Halsey's longest relationship to date.

Halsey has many influences including, The Weeknd, Kanye West, Amy Winehouse, and film directors like Larry Clark, and Quentin Tarantino.

The singer once became the subject of headlines after she called Australian rapper Iggy Azalea an F*****g Moron.

When asked about Halsey’s comments on her Iggy Azalea replied:

"It's a bit weird to bring someone up in an interview that you weren't asked about," Azalea, added correlate it to if she suddenly decided to speak Janet Jackson during that conversation without reason.

Halsey's Age, Height, And Other Facts