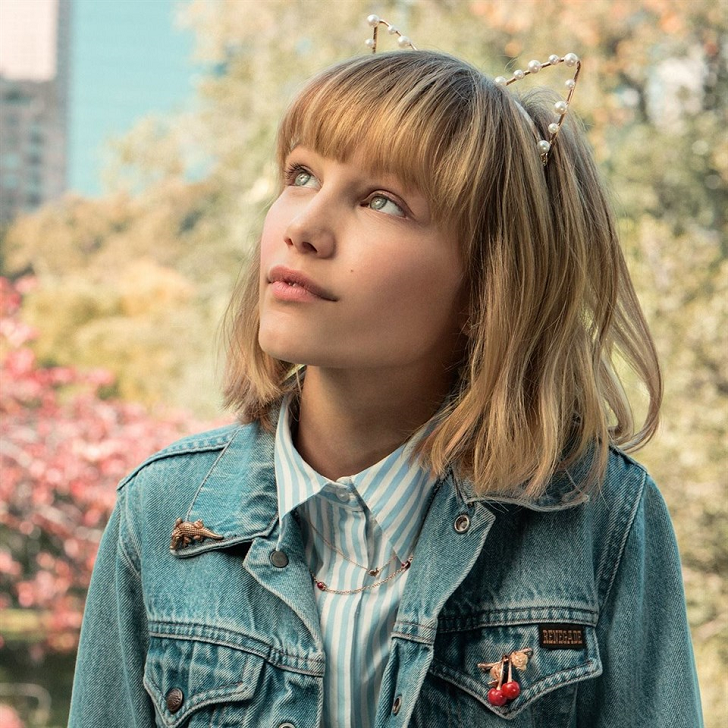 Grace VanderWaal is the winner of the eleventh season of the NBC’s popular reality show, America’s Got Talent. She has got the phenomenal voice that has shocked many of her fans. She started her musical career posting her originals and covers on YouTube and rose to fame after winning the competition. The young talent has won Radio Disney Music and Teen Choice Awards and toured many benefit concerts. She released a debut studio album, Just the Beginning, in November 2017. She has done many charity works at such an early age.

Born on January 15, 2004, in Lenexa, Kansas, Grace Avery VanderWaal is the daughter of Tina VanderWaal and David VanderWaal. She is American and belongs to the mixed ethnic background. Her father is of Dutch descent whereas her mother is of American descent. She belongs to American nationality and her ethnicity is mixed.

VanderWaal’s father is a vice president of marketing at LG Electronics. She currently resides in Suffern, New York with her family. She has an elder brother Jakob Vanderwaal and an elder sister Olivia VanderWaal.

VanderWaal was a born talent, as she started composing her songs at an early age of three, using a wireless microphone. She got an inspiration in music watching movies and imagining what a character was feeling.

VanderWaal decided to learn ukulele after she watched a family friend play and videos of Twenty One Pilots on YouTube. She bought her first ukulele using the money she received on her 11th birthday. She learned to play the instrument watching videos on YouTube.

VanderWaal was homeschooled and provided online courses for a 7th grade after winning America’s Got Talent. She attended a school for 8th grade. She also played saxophone in her school’s marching band.

In 2015, VanderWaal started to record her originals and covers playing the ukulele and posted them on her YouTube channel titled Oh Never mind it's just me/Grace. She created her channel on October 14, 2015. The channel has over millions of subscribers at present.

VanderWaal’s career started from the reality show, America’s Got Talent. She also performed at the Lafayette Theater in Suffern and at the Ramapo Summer Concert Series at Palisade Credit Union Park, after auditioning on AGT.

VanderWaal gave her audition for the NBC’s reality show, AGT season 11, on June 7, 2016. She sang her original titled I Don’t Know My Name on her first audition. Her first performance shocked the audience as well as the judges. She also received a standing ovation from all of the judges.

VanderWaal earned a golden buzzer (by Howie Mandel) for her outstanding act on her debut audition. Simon Cowell, one of the judges called her 'the next Taylor Swift.' Brittany Spanos termed the song an "emotional, catchy, quirky tune" in Rolling Stone magazine.

VanderWaal performed one of her originals, Beautiful Things at the quarterfinals on August 23, 2016. She said that she wrote the song for her sister. She sang Light the Sky for the semifinals and performed Clay for the September 13 finals.

VanderWaal sang I Don’t Know My Name for the second time on the final episode of the show on September 14. Also, the song was performed by American singer, Stevie Nicks comparing her own style with VanderWaal.

VanderWaal was announced the winner at the end of the broadcast, becoming the second female winner and second child act winner in the history of the show.

VanderWaal cited that she wants to use a part of her winning amount donating to charity and buy two tree houses built by the team from Treehouse Masters, for herself and her sister.

After winning the competition, VanderWaal appeared as the guest on shows like The Ellen DeGeneres Show and The Tonight Show Starring Jimmy Fallon in September 2016.

The following year in October, VanderWaal headlined four sold-out concerts in the PH Showroom at the Las Vegas Planet Hollywood Resort & Casino. She performed with other AGT finalists at the event. She also starred America's Got Talent Holiday Spectacular in December on NBC performing the arrangement of her new single, Frosty the Snowman.

VanderWaal signed her recording contract with Columbia records in September 2016. She released her first EP under the label (Columbia Records) on December 2, 2016. The EP consisted of four songs from AGT and an original, Gossip Girl produced by Greg Walls. The EP was a great hit ranking #9 on the Billboard 200 albums chart becoming the best-selling EP of 2016.

VanderWaal’s lead single, I Don’t Know My Name ranked #37 on Billboard’s Digital Song Sales and #24 on the Bubbling Under Hot 100 Singles chart. Her single, Light the Sky also featured as background music in Google’s Year in Search 2016 video.

VanderWaal sang her singles Light the Sky and Riptide at halftime during the match of New York Knicks game at Madison Square Garden, New York City. She performed I Don't Know My Name in Macy's Thanksgiving Day Parade, on NBC's show, Today.

VanderWaal performed I Don't Know My Name in a morning talk show, Live with Kelly and Ryan. She also performed for the engaged couples at the Empire State Building for their Valentine event.

VanderWaal made duet performance with Jason Mraz at the 2017 Special Olympics World Winter Games in Austria. She performed on two of Mraz's songs at the opening ceremony and performed her own singles at the closing ceremony.

VanderWaal performed at the charity events, We Day in Seattle and Los Angeles. The following year, she appeared at the 2017 Radio Disney Music Awards.

VanderWaal also appeared in a fundraiser at Ramapo High School for The Valley Hospital's children's programs in New Jersey.  She launched her CD album titled Perfectly Imperfect in Japan in June 2017.

VanderWaal helped to establish an elementary school show choir in the East Ramapo Central School District. She also sponsored scholarships for graduating seniors from each of Ramapo and Spring Valley High Schools following the music.

VanderWaal started working on her full-length album, Just the Benning in early 2017. She released the album on November 3, 2017. She premiered the first single from her upcoming album, Moonlight while she participated in VidCon's opening show, YouTube OnStage in The Arena at Anaheim Convention Center in Anaheim, California.

VanderWaal’s album ranked #22 on the Billboard 200 albums. She started her debut solo concert tour, Just the Beginning Tour on November 5, 2017. The tickets were sold by September. She returned to Japan for the promotion of her album.

VanderWaal's net worth is $2 million at present. She received $1 million cash prize, after winning the 11th season of America’s Got Talent in 2016.  Her YouTube Channel has earned over 3 millions of subscribers. It also plays a vital role to boost up her net worth.

According to her, she wants to provide a part of her winning amount for a music charity and buy a tree house for herself and her sister.

VanderWaal was a finalist in the Best Female Artist category at the International Acoustic Music Awards in 2017 becoming the youngest finalist in the awards' history. She successfully grabbed the 2017 Radio Disney Music Award for Best New Artist and a 2017 Teen Choice Award.

VanderWaal has earned the stardom at such an early age. She currently resides in Suffern, New York with her family.

VanderWaal cites her favorite artists as Jason Mraz, Twenty One Pilots, and Katy Perry, and included among her musical influences with these artists. She was named "music's hottest young stars" by Billboard to its 21 Under 21 list. Variety, a weekly American entertainment trade magazine listed her in its "Young Hollywood Impact Report 2017."

VanderWaal was listed by Billboard to its 21 under 21 list for the second consecutive year in 2017. The following year, she was listed the youngest Signature Series artist ever by Fender. She also received Billboard's 2017 Women in Music Rising Star Award.