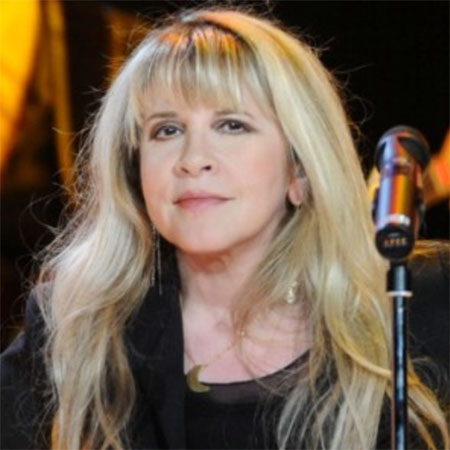 Stevie Nicks is an American singer as well as a songwriter, known for her distinctive voice, mystical visual style, and symbolic lyrics. She worked with the band, Fleetwood Mac which gave the group their only U.S. No.1 hit, ‘Dreams.'Nicks earned eight Grammy Award nominations throughout her solo singing career. She has produced over 40 top 50 hits and sold over 140 million records and became the best-selling music acts of all time with Fleetwood Mac. She is often considered one of the greatest singers of all time. She has released eight solo studio album to date. She released her eighth studio album 24 Karat Gold: Songs from the Vault in October 2014.

Stevie Nicks was born as Stephanie Lynn Nicks on 26th May 1948 in Phoenix, Arizona, U.S. She belongs to White-American ethnicity and holds an American nationality.

She was born to father Jess Nicks, a corporate executive, and mother Barbara Nicks. Nicks moved a lot of places due to the nature of her father’s job. She spent her childhood years in El Paso, Phoenix, Salt Lake City, & Los Angeles. She has a sibling a brother, Christopher Nicks.

Nicks lived with an extended family and her music-lover grandfather taught her to sing and play guitar. She received a guitar as a gift on her sixteenth birthday and spent her teenage days writing and playing music.

Nicks went to the Arcadia High School and later joined Menlo Atherton High School. She enrolled at the San Jose State University where she majored in Speech Communication.  She dropped out in 1968 to pursue a music career.

Stevie Nicks began performing at the age of four and occasionally sang at the tavern which was owned by her parents. She started writing songs in her mid-teens and joined her first group, the Changing Times while attending high school in California.

During her senior year, she met fellow student Lindsey Buckingham and formed the band, Fritz along with her other friends Calvin Roper and Javier Pacheco. They performed live, opening for famous musicians including one of the greatest musicians of all time Jimi Hendrix and Janis Joplin also lovingly called Pearl. However, Fritz disbanded in 1972.

Nicks performed in ‘Tusk’ (1979)  and ‘Live’ (1980) with the band before embarking on a solo career. She continued playing for the group in the future.

In 1981, her solo debut album, ‘Bella Donna’ which peaked on No.1 on the U.S. Billboard chart. The album went Multi-Platinum and established her as a solo star.

Nicks took a break from her solo career for four years and returned with ‘The Other Side of the Mirror’ in 1989. It featured the hit single, ‘Rooms on Fire.'

During this period, Nicks’ cocaine addiction problem worsened & she developed a dependency on the sedative Klonopin. She toured U.K, U.S, & Europe extensively after the release of the album. However, it was claimed to have no recollection of the tours due to her drug problems.

After a very stressful period in her personal and professional life, Nicks brought out the album, ‘Street Angel’ in 1994. However, the record did not do well, forcing her to take time off to get over her drug dependency.

In 2001, Nicks released ‘Trouble in Shangri-La’ after going without a solo album for seven years. The record did well & achieved Gold status in the U.S.

Nicks’ latest album, ‘In Your Dreams’ was released in 2011 & coincided with the 30th anniversary of the release of her debut solo album, ‘Bella Donna.'

Stevie Nicks has done well to carve a huge niche for herself; being a part of several platinum albums. She has been continuously in & out of Fleetwood, an all-time best-selling band which rose to impressive heights in the 70s.

With her mystical image & billowing chiffon skirts, Nicks seems to have remained youthful over the years. She has an estimated net worth of $75 million.

The Fleetwood Mac album Rumors is more than 40 years but was still selling millions as of 2017. Their albums have been certified Gold and Platinum multiple times.

Rumors has been certified gold 13× Platinum by the BPI and Diamond (20× Platinum) by the RIAA.  This album has legendary status and topped the charts in the UK, US, Canda an Australia at the time of its release.

Read More: How Much Is The Net Worth Of The Lead Singer Of The Band Green Day, Billie Joe Armstrong? Details Of His Income Sources And Assets

Stevie Nicks' Personal Life: Does She Have A Husband?

Stevie Nicks is possibly single at present, but priorly she was married to her friend, Robin Anderson widower in 1983. They tied the knot soon after the death of her friend. However, they separate after a short period of marriage, but she remains close to her stepson.

In an interview regarding her marriage and divorce, she said,

"I was determined to take care of (Robin's) baby, so I said to Kim, 'I don't know, I guess we should just get married."

Nicks had affairs with many men during her young days including; Lindsey Buckingham, Don Henley, Jimmy Iovine, Joe Walsh but none of her relationships sustained for long. She always mentioned that she never wanted her own child because of her demanding career, she said,

"My mission maybe wasn't to be a mom and a wife; maybe my particular mission was to write songs to make moms and wives feel better."

Nicks used to maintained journal almost every day for her niece and fairy granddaughters but she has never thought of publishing a book.

In 2007, it was reported Lindsay Lohan wanted to buy the rights to Nicks' life story and wanted to make a movie, but when Nick's was asked about this rumors, she told to Access Hollywood;

Nicks used to live in Paradise Valley until July 2007 with her brother Chris, his wife Lori, and their daughter Jessica. She became an ordained minister of Universal Life Church World Headquarters and also officiated the wedding of John McCauley in 2013.

Nicks started an INGO, ‘Stevie Nicks Band of Soldiers’ for the betterment of wounded military personnel.

Recently, Stephen Davis announced his new book, Gold Dust Woman which was released on 21st November 2017. The book is the biography of Nicks which includes her journey, it reveals all the inside story of Nicks and Lindsay Buckingham.

Discover: Meet Lorrie Morgan The One Who Never Gives Up On Love: After Five Failed Marriages, Lorrie Is Now Married To Sixth Husband Randy White-Details Here!!