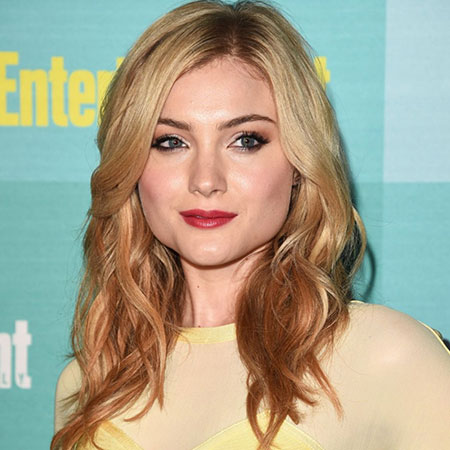 Skyler Samuels was born Skyler Rose Samuels on April 14, 1994, in Los Angeles, California, U.S., under the birth sign Aries. She is American and holds a white-American ethnicity/race.

Her parents are Marshal Scott and producer Kathy Samuels. She has four siblings; three brothers, Cody, Harrison, and Jack and a sister Heather.

Regarding her education, Samuels is majoring in Marketing and Intellectual Property from Stanford University.

At the age of 8, Samuel was a junior correspondent for Access Hollywood. She made her acting debut in 2004, appearing as Ashley Blake in television series, Drake & Josh. She also made appearances in an episode of few Disney shows The Suite Life of Zack & Cody, That's So Raven, Love, Inc., and others.

After working in few minor roles, she got the main role, Andie Bates in 2010 American supernatural crime drama television series, The Gates, starring Rhona Mitra, Frank Grillo, Janina Gavankar, and many others.

The next year, she got another lead role, Chloe King in American supernatural drama television series, The Nine Lives of Chloe King, and was nominated for two Teen Choice Awards. She acted along with Alyssa Diaz, Ki Hong Lee, Grace Phipps, and others.

In 2009, Samuels was cast in the big screen for the role Beth Harding in an American horror thriller film, The Stepfather. The following year, she also appeared in American family comedy film, Furry Vengeance as Amber.

Some of Samuels other notable roles are Wizards of Waverly Place, Bless This Mess, American Horror Story: Freak Show, Scream Queens, and movies credits are Helicopter Mom, The Last Virgin in LA, Sharon 1.2.3., and others.

In 2018, she won Audience Award at the Napa Valley Film Festival for her work in Spare Room as Lillian. As of 2019, she is playing a lead role in several characters of The Frost sisters (Esme, Sophie, and Phoebe) in American science fiction superhero television series, The Gifted. She was cast along with Emma Dumont, Natalie Alyn Lind, Grace Byers, and others.

The actress and model Samuels’ net worth is estimated to be around $1 million, as per Celebrity Net Worth. Her main source of income is her acting career and along with that, she earns from endorsement deals and advertisement.

The Gates star, Skyler has worked in a number of successful movies and TV shows. In 2015, Samuels played the role in a teen comedy film The DUFF which grossed over $43 million against its $8.5 million production cost. The exact amount of her salary for her work in movie and TV series is yet to revealed, but the actress received a good payment.

Besides, Skyler has over 511k Instagram followers, which is also a major source of income as she can command over $430 a post.

The current (2019) relationship status of Skyler Samuels is a bit mystery.  Neither Samuels has spoken about her love affairs and boyfriend nor has shown glimpses of her romantic life on social media. Her quietness has certainly compelled the public to believe that she might be single.

However, the possibilities exist that she might be sharing a beautiful connection with her loved ones behind the curtain. Previously, she dated American actor, Keegan Allen between 2011 and 2012.

Skyler is also an avid animal lover who has a pet puppy.

Let's check out the short interview of Skyler Samuels.