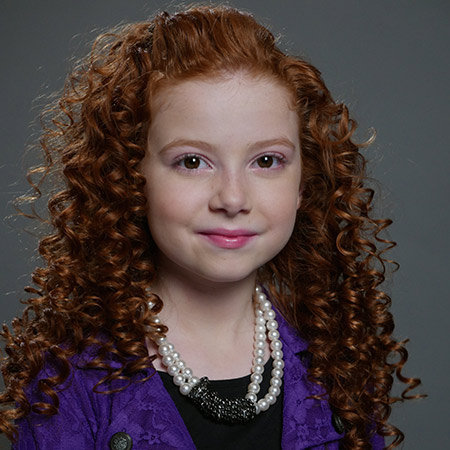 Francesca Capaldi, a child actress, who has made respectable position in American TV and film industry at a very young age. She is known for portraying Chloe James in the Disney Channel 'Dog With a Blog.'

Francesca Capaldi was born on 8 June 2004, in La Jolla, California, US, under the birth sign Gemini. Her parents Gina, who is a former pharmaceutical sales representative, and Anthony Capaldi, who is an international salesman, nicknamed their only child as France.

Capaldi is American by nationality and is of Italian descent. When Capaldi was just 13 months, Paloma Jackson asked her parents to sign a modeling contract and subsequently, appeared in a Sesam Street (DVD). She started her acting from a young age— 7, to be precise, after an agent from Jet Set Models spotted her in a restaurant.

Francesca Capaldi had a minor role as an orphan in Disney Channel's original series ANT Farm, for which she was nominated for the Young Artist Award for the 'Best Performance in a TV Series - Guest Starring Young Actress Ten and Under'.

She also appeared as Jessie Taylor in the movie Small Business. In 2012, she guest-starred as a 7-year-old Lily Aldrin in an American hit CBS TV show How I Met Your Mother, in the episode- The Magician's Code: Part 1 and Nannies.

The same year, she portrayed Jessie Taylor in an independent film 3 Days Test, before she earned a recurring main role on Disney Channel Original sitcom series, Dog with a Blog, alongside G Hannelius, Regan Burns, Kayla Maisonet, and others. The show was premiered on 12 October 2012 and ended on 25 September 2015.

Capaldi also appeared as Mandolin on the episode of Disney Channel sitcom Jessie in 2015. She was cast along with Debby Ryan, Skai Jackson, Karan Brar, and many others. During that same year, she portrayed Kara Bannister in an independent film 'The Dog Who Saved Summer.'

The rising star, Francesca Capaldi has earned a decent amount of money from her acting profession. The exact figurative net worth of Capaldi's is not revealed as of January 2019. Moreover, as per some online sources, the average salary for teen actors is $50 - $100 per hour.

Capaldi also provided her voice for the little red-haired girl and Frieda in a 3D computer-animated comedy film 'The Peanuts Movie.' The movie was directed by 'Ice Age: Continental and Horton Hear a Who!' director Steve Martino.

Capaldi is young and so far there is no news or rumor of her being involved in any romantic affairs. She is currently living with her family and siblings in Carlsbad, Northern San Diego County, California.

Francesca Capaldi's biography is also available on several websites such as Wikipedia and IMDb as well. She is also active on social networking sites such as Twitter.