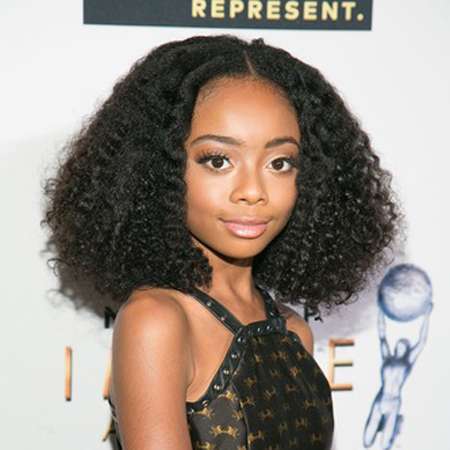 Skai Jackson, an American child actress, is known for her role as Zuri Ross in the Disney Channel Sitcom Jessie. She has enacted in several films and TV series including Arthur, The Smurfs, Royal Pains and Good Luck Charlie. From 2015-2018, the teen actress was a cast in the TV series Bunk'd.

Skai Jackson was born on April 8, 2002, in New York, US. She is a daughter of Kiya and Jacob Jackson who is not together now. She is American in nationality and belongs to black ethnicity.

Her parents divorced and Skai started living with her mother Kiya Cole. As a young girl, she worked as a model in several commercials and shows which include Band-Aid bandages and Kick Buttowski: Suburban Daredevil.

Jackosn started her career from different television shows and television ads. Later on, 2007 she had her first debut film Liberty Kid. Her excellent performance in her debut film offered her more films in her life.
In 2008 she has spotted in a movie Rescue Me.

In 2009 she had a role of Museum Little Girl for the Theatrical film The Rebound. For the same year, she was cast member of the Nickelodeon pre-school animated series Bubble Guppies where she played the role of Little Fish.

During the year 2010-2011, she guests starred in the many television series such as Team Umizoomi, Royal Pains, and Boardwalk Empire. She also played small role roles in the 2011 films Arthur and The Smurfs.

She was cast as Zuri Ross in the Disney Channel sitcom Jessie in 2011. The show is about a wealthy family, the Ross’s, who lives in New York with their nanny; played by Debby Ryan.

Jackson playing the role of Zuri Ross is an adopted child in the Ross family and the youngest child. Skis co-stars include Peyton List, Cameron Boyce, and Karen Brar. She has been nominated for NAACP Image Award for Outstanding Performance in a Youth/Children's Series or Special for her brilliant performance in Jessie.

Jackson is very young and is much dedicated to her career. She has not dated anyone because she is solely focusing on her career and honestly speaking and she is quite young to start dating and having a boyfriend.

From 2015-18, the teen actress played the role in the Disney’s series Bunk'd alongside Peyton List, Karan Brar, Miranda Ma, and Nina Lu.

Skai Jackson's Net Worth And Earnings

Skai Jackson has achieved great success in her work in TV shows and movies and this has given her great earnings as well. Her net worth in 2019 is $500,000 as per celebrity net worth. Skai Jackson also gets paid by sponsorships, ads, endorsement, featuring and so on.

It is estimated her yearly income of around $58,824 and Sponsorships/Endorsement amount is $13,072.

Most of her fans follow her via facebook pages as well. Millions of people are connected with her via facebook. Her fans can get her bio and interviews from Wikipedia as well.