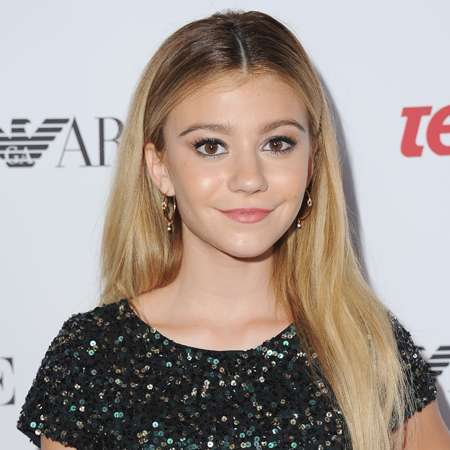 Genevieve Knight Hannelius, as G Hannelius is an American actress, voice actress, and singer. She starred in TV series and films like Dog with a blog, Sonny with a Chance, Good Luck Charlie, Black & Blue and much more.

Hannelius was born on 22nd December 1998, in Boston, Ma s sachusetts, to father Paul, mother Kathy and she also have a younger sister, Michelle. Her father is Swedish. They moved to Falmouth, Maine when Hannelius was three years of age.

Hannelius always loved entertaining people since her early age, as she started her acting career when she was very young.

Her professional career began In 2002 when she began playing in the Children’s Theater of Maine’s production of Madeline’s Rescue in summer along with Maine State Music Theater and Children’s Theatre of Maine.

She moved to California to pursue her dream and gave an audition, she was so successful, later Hannelius and her family moved permanently to Los Angeles in 2008. She is an old grad of the Los Angeles-based Young Actors Studio.

From 2012-2015, she starred on the Disney Channel series named Dog with a blog which was premiered on October 12, 2012. In 2016, she appeared in miniseries, roots as Missy Waller and film, Before I Fall as Angel.

Besides her acting career, Hannelius has released many singles on iTunes Store and Google Play. In 2011, she first released her single, Staying Up All Night. Since then she has released several songs from which six of them was written by herself.

Moving on to her personal life, she once dated an actor, Bradley Steven Perry in 2011 but they ended up separating after few weeks. There were rumors that she was dating Jack Chiate in 2015. She later confirmed the rumors to be true and told everyone that they are a couple.

In May 2016, she celebrated their 6-Month Anniversary. They seem to be happy with their relationship as there’s no rumor about any fight or separation or any other affairs. It seems like she is happily settled with him together to be in future.

In 2010, she had a net worth of $500,000 and every year her net worth increases. Currently, she has a net worth of $1 million by which we can clearly a s sume that she earns a good amount of salary. G Hannelius is active on many sites like facebook, Instagram, and twitter.

G Hannelius possess a height of 5 Feet 1 Inch and a weight of 99lbs.