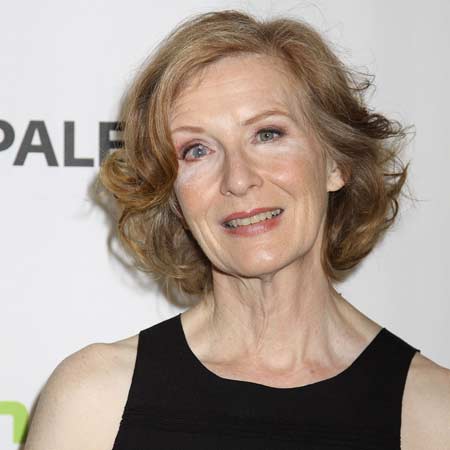 Frances Conroy is an American actress popularly known for playing Ruth Fisher in HBO series, Six feet under. She is active in the entertainment industry since 1978 and has given some amazing performances in movies, TV series, theatres, and TV films. Conroy is cast in some renowned series like How I Met Your Mother, Desperate Housewives, American Horror Story, Six Feet Under, Grey's Anatomy, and Law & Order among others. She appeared in the 2018 movie, The Tale which aired on 26 May on HBO.

Frances Conroy was born Frances Hardman Conroy to parents Vincent Paul Conroy and Ossie Hardman on November 13, 1953. Her father was of Irish descent and worked as a business executive and her mother also worked in business.

She did her schooling at Dickinson College in Carlisle, Pennsylvania and later moved to New York City to enroll in a drama school named Neighbourhood Playhouse. He also attended Juilliard School. While learning drama in Juilliard she was listed in the Juilliard Drama Division Group 6 with other actors like Harriet Sansom Haris, Kevin Conroy, Robin Williams, and Kelsey Grammer.

Conroy debuted in the entertainment industry in 1978 with All's Well That Ends Well as Diana and a year later appeared in the feature film Manhattan. In 1982, she debuted in the Television industry with an anthology television series called American Playhouse. Since her debut, Conroy has been cast in uncountable movies, TV films, and TV shows.

Conroy has been cast in movies since 1979 till the present. She did movies like Manhattan, Falling in love, Amazing Grace and Chuck, Rocket Gibraltar, Scent of a Woman, The Neon Bible, Angela, The Crucible and so on in her 20 years of a film career. In the recent 2010's she was cast in some movies like Bloodworth, All-star Superman, Welcome to Happiness, No PAY, Nudity, Tom & Jerry: Back to Oz, and The Tale among others. Her recent release is the American drama film, The Tale which premiered on May 26, 2018, on HBO.

In the following year, the actress went on to play in a megahit thriller movie Joker alongside Joaquin Phoenix, Robert De Niro, and Zazie Beetz as well. The movie grossed $1.070 billion at the box office worldwide.

Convey has quite a career in Television and has done several TV series like American Playhouse, Kennedy, The Twilight Zone, NewHart, Crime Story, Cosby, Happy Town, Love Bites, Casual, and Getting On among others. However, she is popular for her roles in American Horror Story, Grey's Anatomy, How I Met Your Mother, Desperate Housewives, Six Feet Under, and Law & Order.

Conroy first appeared in a TV film in 1978 with the role of  Diana in All's Well That Ends Well. After her debut, she featured in other TV films like The Royal Romance of Charles and Diana, Journey, Thicker than Blood, Murder In a Small Town, and A Perfect Day. Her last film was 2013's Ring of Fire, a biographical television film about the life of June Carter Cash and Johnny Cash.

Conroy first acted in the drama play named Othello as Desdemona. Later on, she acted in multiple dramas acts like The Lady from Dubuque, Painting Churches, Our Town, The Secret Rapture, Ivanov, The Last Yankee, The Little Foxes, The Dinner Party, The Subject was Roses, The Skin of Our Teeth and lots more. She was last seen acting in a drama in 2010 which was The Subject Was Roses, a Pulitzer Price Winning drama written in 1964.

Conroy has won many awards and has been nominated numerous times till now for her work in the entertainment industry.

Conroy's estimated net worth is $4 million, according to celebrity net worth as of 2020. She earns her fortune mostly from stage shows, movies, and TV series. For being cast in the popular series How I Met Your Mother, she earned around an estimated $225,000 per episode and for Law & Order, she made  $450,000 per episode.

Conroy is married to actor Jan Munroe since 1992 and going strong till present. They don't have any children and are happy together. Her favorite famous colleagues are Alyson Hannigan and Burt Lancaster.

Frances previously also married Jonathan Furst in 1980. It is yet to be revealed when the two got divorced.

Conroy revealed in an interview that she is scared to watch horror movies but she has acted in one.

What Happened To Her Eyes?

Frances Conroy was once involved in a tragic car accident. As a result, her left eye's corneal damaged which is most probably different from another eye. Following the incident, the actress also underwent surgery but it didn't work properly. She uses color lenses to hide her eye condition.