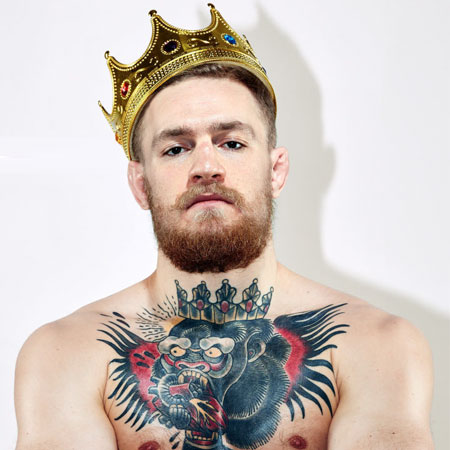 Conor Anthony McGregor is an Irish professional mixed martial artist and professional boxer, currently signed to the Ultimate Fighting Championship, is set to make his professional boxing against Floyd Mayweather Jr. on 26 August 2017.

Conor Anthony McGregor was born on 14 July 1988 in Crumlin, Dublin. He is the son of Tony and Margaret McGregor. McGregor grew up in Crumlin and joined Gaelscoil and Gaelcholaiste at both primary and secondary level in Colaiste de hIde in Tallaght, as well as he also developed his passion for sports playing association football.

At his age of twelve, McGregor started boxing as he joined Crumlin Boxing Club. Later in 2006, McGregor moved with his family to Lucan, where he met future UFC fighter, Tom Egan. Soon they started training mixed martial arts together.

Conor McGregor's career began on 17 Feb 2007, at his age of eighteen years when he made his mixed martial arts debut, in an amateur fight against Keiran Campbell for the Irish Rong of Truth promotion in Dublin.

McGregor became victorious via technical knockout in the first round. Due to his impressive victory, McGregor became professional and was signed by the Irish Cage of Truth promotion. Later in 2008, he began training at the Straight Blast Gym in Dublin under John Kavanagh.

On 9 March 2008, McGregor's first professional MMA bout, as a lightweight in which McGregor defeated Gary Morris with a second round TKO. After his numerous victories, McGregor rolled into Ultimate Fighting Championship.

When joined, McGregor became only the second fighter from Ireland to compete for the company, following SBG team member Tom Egan.

On 6 April 2013, McGregor made his UFC debut against Marcus Brimage on the preliminary card UFC on Fuel TV: Mousasi vs. Latifi. McGregor's gaming strategy made him won, as the game stopped 1:07 into the first round. The win also made him won the first Knockout of the Night award.

In the following match which held on 17 August 2013, McGregor won the match but got injured, which made him have a surgery also.

Later in 2014, McGregor, was expected to face Cole Miller on the 19 of July 2014, at UFC Fight Night 46 in his return bout after recovering from his ACL injury. However, Miller pulled out of the bout citing a thumb injury and was replaced by Deigo Brando.

McGregor fought Brando in front of loud, rowdy crowd of 9500 at The O2 in his hometown of Dublin, Ireland, as McGregor began the fight with his signature spinning side kick.

Giving prior before his next bout, Mcgregor met Lorenzo Fertitta and signed a new multi-fight contract with the UFC. The next he faced Was Dustin Poirier on the 27th of September 2014 at UFC 178.

McGregor's dominant victory over Poirier teamed up with his brash trash-talking at the rest of featherweight division, particularly UFC Featherweight Champion Jose Aldo, allowed hi to establish a claim to a potential title shot in the future.

McGregor anticipated bout with Aldo was announced on 30 January 2015, at the UFC 183 Q&A. McGregor himself declared that he expected to face Aldo on 11 July 2015 at UFC 189 for undisputed UFC Featherweight Championship, during UFC's annual International Fight Week.

McGregor and Aldo also did 12-day world tour where they stopped over eight cities in five countries including Aldo's home country Brazil and McGregor's Ireland.

Later on 10 August, Dana White confirmed that the UFC 194 event, which was initially scheduled to be held at the AT&T Stadium in Texas on 5 December. It will be held at MGM Grand Arena, in Las Vegas, Nevada.

The next day it was announced that the event would take place on 12 December, as Conor will face Jose Aldo in their long-awaited UFC Featherweight Championship unification bout.

Later when both men met in the center of the octagon for referee John McCarthy's instructions, his opponent Aldo refused to make eye-contact with him, as Aldo's usual fight tradition. Nobody performed the customary touch of gloves.

As the match started, McGregor encountered with his hook while his opponent was charging, as Aldo fell to the ground and McGregor charged with punch two times, their referee John McCarthy halted the bout.

The match lasted only 13 seconds, considered as the fastest finish in any UFC title bout, making him as only the second undisputed UFC Featherweight Champion in the history. The fight went on a record-breaking fifth consecutive occasion, as McGregor was announced as the winner.

In the year 2016, McGregor carried on to move up to the lightweight division, in an attempt to become the first ever UFC dual-weight champion. On the FOX Sports post-fight show for the UFC 194, as McGregort claimed that he would like to go up and fight for that 155-pound belt and replicate what I've done in Cage Warriors.

Later on 23rd Feb, it was announced that Anjos (McGregor's opponent) was withdrawing from the fight after breaking his foot. Various fighters were asked to step into fight McGregor, even his previous opponent Aldo refused due to lack of time.

Unfortunately, McGregor lost the fight, as he was tapped into Diaz's submission lock in the second round. However, both of the competitors were awarded "Fight of the Night" bonus.

After his tremendous loss, McGregor wanted a rematch. The fight between them was scheduled for July 9 at UFC 200. However, on April 19, the UFC announced that McGregor had been pulled out from the event as he failed to fulfill media obligations related to the fight.

After the fight was rescheduled, the next months McGregor won the rematch via majority decision.

McGregor is in a relationship with his longtime girlfriend, Dee Devlin since 2008. They also share a child together named Conor Jack McGregor, born on 5 May 2017. However, he has married or not it is yet to be disclosed.

Besides his personal affairs, McGregor is fluent in Irish, as he usually carries a hat which his grandfather frequently wore before he died.

Conor McGregor earns an enormous amount of money from his fighting career as UFC pays him handsomely. He also owns a variety of luxurious cars, some of them including Rolls Royce, Ferrari, Mercedes-Benz, Lamborgini, etc. His net worth is estimated to be $35 million.