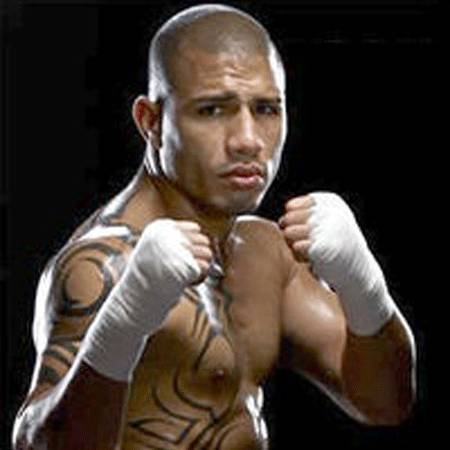 Miguel Angel Cotto Vazquez, best known as Miguel Cotto, is a professional boxer for Puerto-Rico. He is the first Puerto-Rican boxer to win the world titles in four different weight cla s ses. He is ranked fourth in the world best middle-weight by Transnational Boxing Ranking Board (TBRB). Miguel is also known as Junito.

His uncle Evangelista Cotto is a former boxing trainer. Therefore, Miguel pursuing his career in boxing has not been an unexpected move. Miguel Cotto started boxing since he was a child. He was trained in Bairoa Gym in Caugas where he developed himself as an amateur fighter. There is no any information available on his education.

Miguel initially joined the Bairoa gym, when he was 11, to lose his weight. In 1993, when he was 12,  he fought against Ivan Calderon and lost the match but became great friends. Later in 1997, he played in amateur matches where he won a gold medal at 1997 Pan Am games (Colombia), Silver Medal at 1998 World Juniors (Argentina), and four successive Puerto Rican national titles from 1997-2000. He had a successful amateur career. He turned professional on 2001 with Bob Arum.

Miguel Cotto played in six pro matches and his career almost ended after he fell asleep while driving and crashed the concrete wall. He broke his arm and shoulder in four places and still has 6 inches titanium rod placed in his right arm.  Miguel won his first world champion in September 2004 for WBO light welter beating Brazilian banger Kelson Pinto who defeated him twice in an amateur career. In 2014, he became the first Puerto Rican to won four separate weight title divisions. Miguel has won 19 out of 23 world matches. His matches are the pay-per-view events.

Still being an active boxer,  Miguel Cotto is the owner of boxing promotion named “Promociones Miguel Cotto” which organizes fight cards in Puerto Rico. He is the founder of “El Angel” which is a non-profit organization promoting physical activity and measures of infant obesity. Miguel is a rich man. He is paid a good salary and has the net worth of $35 million.

Miguel is a married man. He is married to his sweetheart Melissa Guzman in 1998. They dated for some while before getting married. The couple is blessed with two children, a daughter and a son named Alondra Cotto and Miguel Cotto III. He had an extramarital affair from which he has a daughter born on 2006. Though he broke the trust of his wife, his wife forgave him and is living happily together.

Boxer Miguel Cotto is active on social sites like Twitter, Instagram, and Facebook where he is gaining more follower day per day. Having been the boxing icon, he is adored and respected for his talent globally. His short biography in Wikipedia adds a lot to know about him. More information on him can be fetched from different internet sites.