Five Most Shocking Moments in the World Cup History

World Cup has seen many of the shocking moments in the past years. Some were funny, aggressive, as well as history-making.

Here's the list of five most shocking moments in the history of World Cup.

Andres Escobar, the Colombian defender whose own goal led his country to an elimination from the World Cup.

The goal occurred in a match against the United States on June 22, in the second match for Colombia at the 1994 World Cup.

Another shocking moment that World Cup saw was Uruguayan striker Luis Suarez biting Giorgio Chiellini at the 2014 World Cup. The incident occurred on June 20, 2014, at the Group D qualifying match, where Uruguay beat Italy 1-0 finishing second in the group.

Suarez was suspended from all football-related activity for four months for his activity. Also, he was banned for nine international matches, ruling him out of the rest of the 2014 World Cup at the time. He was fined 100,000 Swiss francs (£65,680) for the incident. The ban was the biggest in the history of World Cup.

Frank Lampard’s disallowed goal at the 2010 World Cup made a positive impact on FIFA. The match was held on June 29, 2010, against Germany, which England lost by 4-1.

However, the English midfielder said that he has no regrets over his disallowed goal but is happy as the strike helped force FIFA introduce goal-line technology.

In the 2006 World Cup Final, Zidane headbutted Italian midfielder Marco Materazzi in the chest. It was a moment France will never forget, as Italy wound up winning the match in penalty kicks.

1. Maradona: Hand of the God

The most infamous goal in the World Cup History is Maradona’s “The Hand of God”. The incident occurred at Argentina’s World Cup quarter-final against England in 1986. 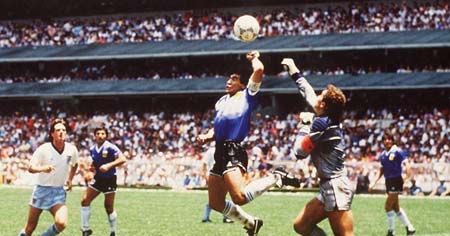 The match took place at the famous Estadio Azteca and was taken over by the greatest player on the planet at the time, Diego Maradona.

Maradona scored the opening goal himself punching an aerial ball past England goalkeeper Peter Shilton. It was and still is the most astonishing moment in the rivalry between England and Argentina.