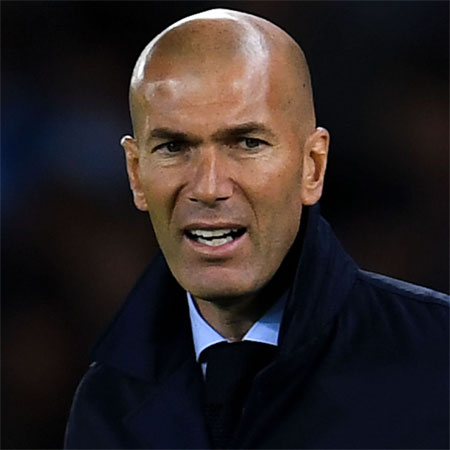 Speaking about talisman of modern football the name of Zinedine Yazid Zidane known simply as Zinedine Zidane or Zizou comes very first on the list.  He is a former French international soccer player who currently manages soccer club Real Madrid. Best known for his playmaking skills, insane techniques and visionary pa s ses on the pitch Zidane won player of the year three times in his glittering trophy-laden career. A feat matched by very few players.  In his club career, Zidane played for Cannes, Bordeaux, Juventus, and Real Madrid. The best moment of his club career came when he scored the match-winning sick volley against Bayer Leverkusen in 2002 Champions Leauge final.

Besides his professional club success, he also won the most prized trophy in soccer history Fifa World cup 1998 from his country France and also reached the final of 2006 World Cup. Amid his jaw-dropping career, he was not free of controversy in soccer pitch and has some memorable issues in the field.

Zinedine Zidane nicknamed "Maestro" by the Real Madrid fans was born on June 23, 1972, in La Castellana, Marsellis France. His parents Smail and Malika immigrated to France from Algeria. Zidane has five other siblings and his father had a hard time providing for the family often changing jobs and home.  Zidane grew in Marsellis which was infamous for its notorious gangsters and high unemployment rate.

At the age of ten Zidane joined the junior club at a local club of Castellana named US-Saint Henri. After a year and a half, he joined  Septemes Les- Vallons and stayed there until the age of 14. While attending three soccer camp at Regional center for sports and physical education he was spotted by AS Cannes scout a former player Jean Varraud.

Zidane began his professional career from AS Cannes. He joined the club for six weeks but eventually stayed there for four years. In his first season at AS Cannes, he helped the club to secure the fourth position in the French Divison 1 league which qualified the club for their first UEFA Cup. Zidane played for club Girondins Bordeaux in 1992/93 season.  During his spell at Bordeaux, he was a transfer speculation for English clubs Newcastle and Blackburn but the move never materialized. He was awarded Ligue 1 player of the year in 1996.

CAPTION: Zinedine Zidane during his spell at Juventus SOURCE: youtube.com

After a standout performance for Bordeaux Zidane transferred to Italian giants Juventus. Zidane was part of the team when it won Italian Serie A title in 1996/97 season but was runner-ups in 1997 Champion Leauge final. In 1998 Zidane won player of the year award. His amazing performance in Italy was scouted by Real Madrid and in the year 2001 Zidane transferred to Real Madrid in world record fee of $ 95 million. Real Madrid won 2002 Champions League against Bayer Leverkusen inspired by heroics of Zinedine Zidane.

Zidane joined Real Madrid in World record fee of $95 Million the then record price for transfer of a single player. He was the latest addition to be introduced in Galacticos Madrid era. In his first season playing for the club, Zidane scored match-winning Volley against Bayer Leverkusen in Champions Leauge final. The next season Real Madrid won La Liga 2002-03 with Zidane and Luis Figo controlling the midfield. He was named senior FIFA world player of the year in 2003. Though the following years to come were trophy drought for Real Madrid he scored a hattrick in the last season for Real Madrid in January 2006 in a 4-2 win against Sevilla. Zidane retired at the end of 2006 season scoring 49 goals in La Liga for Real Madrid.

Zidane earned his first cap for France when he came as a substitute against the Czech Republic in International friendly match. Zidane scored 2 goals in that match to get a draw for France making a come back from 2 goals down. Zidane played Euro 96 as a substitute coming from the bench. In that tournament, France was eliminated in the semi-final in a penalty shoot-out against the Czech Republic.

Zidane showed his heroics in his own native country in 1998 France world cup scoring twice in the final. That year France won the previous winner Brazil 3-0 and lifted the trophy.  Two years later at Euros, France again won and became the first team to hold both European Championship and World Cup since West Germany in 1974.  He scored two goals in that tournament including a curving free kick against Spain. After the Euro 2000, France had a bad world cup campaign in Korea/Japan and was eliminated from the group stage and again in Euros 2004, France was eliminated in Quater finals by surprise winners Greece.

Zidane announced retirement from International football after Euros 2004 but eventually came back from retirement to lead French National team to finals of 2006 Germany World cup. But to the misfortune in final, Zidane was shown red card after he headbutted Italy's Marco Matterazi.  After 1-1 draw, France lost to Italy in the penalty shootout.

Zidane started his coaching career in 2014 with Real Madrid B team also known as Real Madrid Castilla. On 4th January 2016, Real Madrid dismissed their first team manager Rafael Benitez and appointed Zidane as the new head coach.  In his first match in charge of Real Madrid senior team, he won against Deportiva La Coruna 5-0.  Though the league performance of Madrid was not up to the expectation they won their 12th Champions Leauge against local rival Athletico Madrid.

In his second season as in charge, he won La Liga and Champions League 2nd time in a row defeating Juventus 4 goals to 1. Real Madrid became the first team to retain Champions League. During his time as Manager in Madrid, he has coached some famous name of soccers including Cristiano Ronaldo, Toni Kroos, Sergio Ramos and Luka Modric.

Though hailed as the greatest player of his generation by many football pundits, Zidane was also referred as a hot head and lacked discipline in the pitch. He was red-carded for headbutting players in various incidents. But his most famous or say infamous case came when he headbutted Italy's defender Marco Materazzi in Fifa World Cup 2006 final eventually losing to Italy.

Zinedine Zidane's Net Worth and Salary

During his time as a player, Zidane was brought to Real Madrid from Juventus at a fee of $96 million, world record transfer of that time. As of 2018, Zidane's estimated net worth is $70 million.  His salary as Real Madrid boss is $9.5 million per year.  Besides his enormous salary, Zidane also endorsed many brands including Addidas, Lego, Orange, Audi, and Volvic. He also has his own personal Yacht. In his Instagram account, he has almost 17 million followers. Zidane's car collection includes Range Rover ($53,000), Audi ( $1,00,000 ) and Ferrari ($2,00,000).

At the age of 17, Zidane met his future wife  Veronica Fernandez during his spell at AS Cannes in 1988/89 season.  The couple married in 1994 and now have four sons named Enzo Alan Zidane Fernandez, Luca Zinedine Zidane, Theo Zidane Fernandez and Elyaz Zidane Fernandez. All of his sons play for Real Madrid Junior team except Enzo Fernandez who plays for Laussane sport.  Zidane is also involved with UNICEF and is active Donor and Volunteers in various Charity activities.