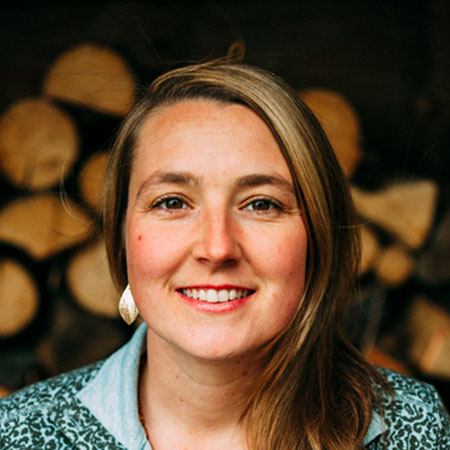 Deep in the wilderness of Alaska Discovery doc u ments the life of the extended family of the Kilchers with their show 'Alaska: The Last Frontier'. One of the stars of this reality TV show is Eve Kilcher, the wife of Eivin Kilcher. She came into the limelight as one of Kilchers on their show, where she is one of the main casts.

Eve Kilcher was born Eve Steller Matkins on June 8, 1984, in the USA to mother Dena Matkins and father Craig Matkins under the star sign Gemini. She spent her childhood days with her mother in Gustavus located near Glacier Bay National Park, Southeast Alaska. She belongs to White ethnicity and is an American by nationality.

CAPTION: A photo of Eve on her show. SOURCE: Discovery

She went to Homer high school and graduated in 2001. After graduating, she went on to study at the University of Oregon and graduated with a bachelor's degree in Psychology studies in 2006. She is also a self-taught cook who studied permaculture at Aloha Aina Permaculture Design Course.

Eve started her career on TV as part of the reality TV series Alaska: The Last Frontier. She appears on the show next to her husband Eivin Kilcher. The show started in 2011 and is still airing, as of February 2019 the show has more than 123 episodes and 8 seasons.

The following is a video on Eve Hilcher and her husband Eivin Kilcher.

To add to her career as a reality TV star she is also an author, along with her husband she co-wrote the book ‘Homestead Kitchen: Stories and Recipes from our Health to Yours’. The book consists around 85 recipes.

Additionally, she also promotes healthy, clean and organic living, she works with her husband to promote a hybrid lifestyle which contain are a mix between old-school and modern traditions.

Kilcher’s career as a TV reality TV star and an author provides her with a steady income, as of February 2019 she ama s sed a net worth of around $2 million.

However, the average TV earns around $100 per day. Similarly, on average authors earn around $55,420 per year which is $26.64 per hour according to the Bureau of Labor Statistics.

You May Also Like: Alaska: The Last Frontier's Otto Kilcher: Details Of His Net Worth And Career Highlights Here

Kilcher is a happily married woman with 2 children, she tied the knot to Eivin Kilcher in a ceremony held in August of 2011. Their love story is a rare one as former friends and neighbors turned into partners. In fact, Eivin was her neighbor when she was growing up in Alaska.

Apart from this, there is no information about her former relationships in the public domain. She maintains a low key personality about her past affairs and love life.