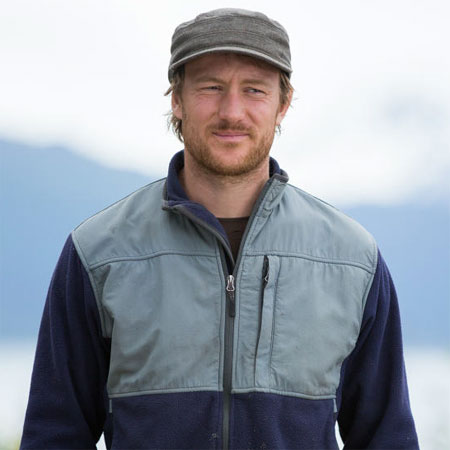 American Reality star, Eivin Kilcher is the son of Otto Kilcher. He is known for his role in Discovery Channel's Alaska: The Last Frontier. In 2016 Kilcher and his wife Eva published a cookbook entitled Homestead Kitchen: Stories & Recipes from Our Hearth to Yours.

Kilcher married Eve, and they together have a son, Findlay and a daughter, Sparrow Rose.

Eivin Kilcher was on 6th March 1984 as the oldest son of Otto Kilcher in Alaska, United States. He belongs to White-American ethnicity and holds an American nationality.

During his childhood & early years, Kilcher grew up along with his three siblings in a family of hunters and farmers. He went to Homer High School and graduated in 2001.

A reality TV star Eivin Kilcher’s career revolved around hunting, fishing, & farming. His whole family appears in the TV reality show, ‘The Alaska: The Last Frontier’ which started from 2011.

Additionally, it is running in its sixth season & is flying high with its content, capacity to attract and engage  viewers. The show showcases the family’s simple life without modern equipment.

In 2015, Kilcher starred in a Subaru commercial along with his wife. He also released cookbook entitled ‘Homestead Kitchen: Stories & Recipe from Our Health To Yours.'

The book gained a lot of popularity among its readers who found the recipes and stories about their remote lifestyle quite fascinating.

Eivin Kilcher is married to his co-star, Eve Kilcher of the show, The Last Frontier. The couple has two children Findlay and Sparrow Rose.

Kilcher’s is passionate about hunting, cooking, & building. He has a six-figure annual salary of $350,000, and net worth is around $2 million.

Kilcher is quite popular on social media, Twitter, Facebook, and Instagram. He shares pictures of his homestead kitchen in social media & articles about homestead lifestyle at the local newspaper.