Erika Leigh Henningsen is an American actor and singer. She is mostly known for her work on Broadway and the role of Cady Heron in the 2018 Tony-nominated musical Mean Girls, for which she earned a nomination for the Outer Critics Circle Award.

Henningsen is currently 28 years old. She was born on August 13, 1992, in Moraga, California, USA, to parents Phil Henningsen and Marybeth Henningsen. Talking about her height and weight, Erika Leigh is cited to be 5 ft 5 in (1.65 m) tall and weighs about 127 lbs (58 kg). She is the youngest of three daughters.

The 28-year-old graduated from Campolindo High School in 2010. She then studied at the University of Michigan and graduated with a BFA in musical theatre in 2014. Henningsen also studied at the Royal Academy of Dramatic Art in London through the NYU London program during her undergraduate years.

Is she married? Husband & Children

Henningsen is not married, nor does she have a husband or kids as of now. The 28-year-old is in a relationship and might tie the knot a few years later. 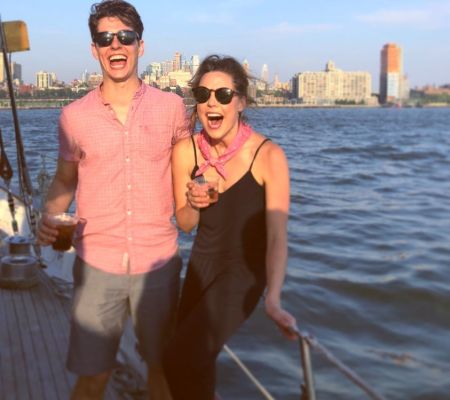 CAPTION: Erika Henningsen and actor Kyle Selig have been in a relationship since late 2017. SOURCE: Instagram @erikahenningsen

Erika met her partner, Kyle Andrew Selig, during the out-of-town tryout for Mean Girls in Washington, D.C. They started dating in late 2017 and have been together ever since.

According to some online sources, Henningsen's net worth is estimated at $500,000 as of 2021. She was cast in her first professional production as Penny Pingleton in Hairspray at the Woodminster Amphitheater at the age of 17. Erika made her New York Philharmonic debut as Kim Ravenal in a staged concert production of Kern and Hammerstein's Show Boat in November 2014.

A year later, the 28-year-old actress made her Broadway debut as Fantine in the revival of Les Misérables, becoming the youngest actress in Broadway history to play the role. Erika starred as Cady Heron in the Tony Award-nominated Broadway musical Mean Girls by Tina Fey, receiving a nomination for an Outer Critics Circle Award.

The stage musical is based on the 2004 eponymous film and premiered at the National Theatre, Washington, D.C., in October 2017. It opened on Broadway at the August Wilson Theatre in April 2018. However, due to the COVID-19 pandemic, it played its final performance on Broadway in March 2020.