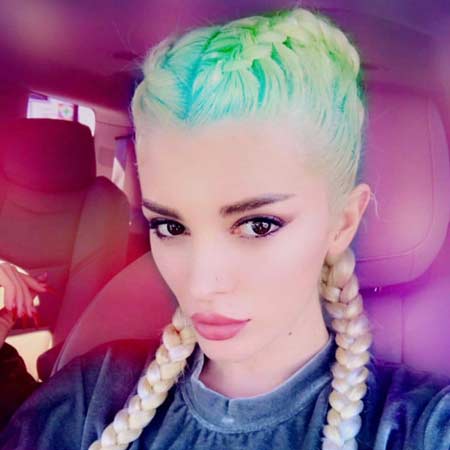 An Award-winning Kosovar singer and songwriter, Era Istrefi, gained international acclaim after the success of her single Bon Bon released in 2016. The video immediately went viral and she became a sensation overnight. Istrefi launched her first single in 2013 titled, Mani per money. Some of her other most popular songs include 13, Shume pis and E Dehun. As of 2018, she featured with Nicky Jama and Will Smith in an official World Cup song, Live IT Up.

Ear Istrefi started her music career in 2013 by releasing a single, Mani per money. Following the release of her third album, E Dehun in 2014, she won three Videofest Awards. The same year, she released a song, 13 which became the most viewed video with over 200k times in 24 hours.

Istrefi’s breakthrough came on 31st December 2015 with the release of BonBon with a music video. The song became viral overnight on social media. The song hit #46 on ARIA and received several gold certificates. She also won a Top Music Awards in the category of song of the year. Fans also started comparing her work with Rihanna and Sia.

In February 2016, she signed a recording deal with Ultra Music and Sony Music Entertainment. Istrefi released her new single, Redrum on 24th February 2017 featuring producer Felix Show. On 21st May 2018, she joined Nicky Jam and Will Smith to release an official song for 2018 FIFA World Cup.

Era Istrefi has earned several nominations and awards for her amazing works and some of them are listed below:

She was also nominated for Kult Awards, Public Choice Awards, and Top Music Awards among others.

Era Istrefi has an estimated net worth of over $1 million. She makes money from her music career and maintained a lavish lifestyle.

Istrefi owns an Audi A5 costs $42,600 and Cadillac costs between $34,705 to $90k. Within a very short period of her career, she earned a huge name and fame and considering her big upcoming projects we can assume she has a bright future ahead.

The talented and young Kosovar singer, Era Istrefi has a hand full of work. She is hardworking and ambitious which might be the reason for giving first priority to her works rather than involving in any serious relationships. As of 2018, Istrefi is possibly single.

Previously, Istrefi was linked to her manager Faton Shosi. Despite, they officially confirmed that they were not together there were several reports about them dating and hiding their relationship.

Istrefi is a big supporter of LGBT rights.

Here is the video which shows 10 facts about Era Istrefi: