Emma Mackey is a rising French-British actress who started her professional acting career in 2016. The 24 years old actress came into the spotlight for appearing as Maeve Wiley in the television drama series, Sex Education alongside co-stars Aimee Lou Wood, Connor Swindells, and Chaneil Kular.

Emma’s full name is Emma Margaret Marie Tachard-Mackey. She was born on 4th January 1996, and is 24 years old, as of 2020. She was born in Le Mans, France, and grew up in Sable-sur-Sarthe.

Emma belongs to French-British nationality whereas her ethnicity is mixed. The name of her parents is not known; however, her father is French and her mother is English. Her dad is a school headmaster.

Upon receiving baccalaureat in 2013, Emma moved to England to join the University of Leeds and graduated with the English language and literate in 2016. As of now, she resides in London.

Regarding movie career, she made a big-screen debut in 2019. She acted as Jess in the short movie Tic. She is currently busy shooting for movies like The Winter Lake, Eiffel, and Death on the Nile.

Talking about Emma Mackey’s net worth, her worth is reported to be around $650 thousand. Her annual salary is $50 thousand.

Actually, Emma’s height is quite confusing. Some tabloids claimed that she is 5 feet 2 inches tall whereas some sources claim to be 5 feet 8 inches. Her weight is 54. Her body measurements are 34-24-35 inches. Her hair and eye color is dark brown.

For fans and followers keen to know about Emma’s current relationship status, she is single. She might be busy focusing on her prosperous acting career.

However, back then, Emma was in a relationship with her boyfriend Dan Whitlam, who is also an actor. Her former boyfriend studied at the Guildhall School of Music Drama. 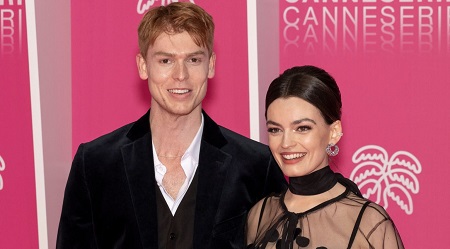 According to sources, Emma and Dan dated for three years before breaking up in early 2020.