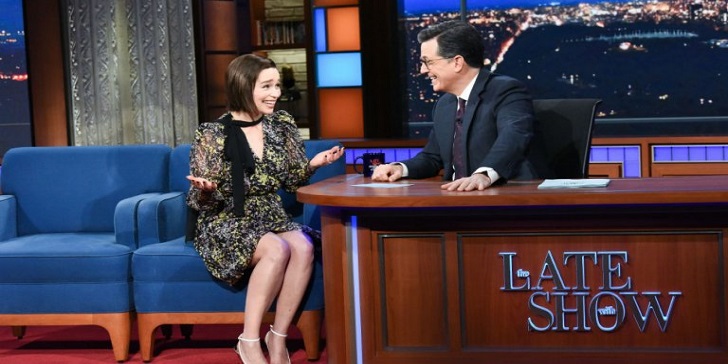 The British actress, Emilia Clarke revealed that she told the end of the Season Finale of Game of Thrones to her mother.

Emilia Clarke who plays Daenerys Targaryen in the blockbuster series stopped by The Late Show on Tuesday.

When asked by the host of the show Stephen Colbert, as to whether she had disclosed the ending to anyone, she replied,

The good thing about telling my mom was that she's a vault. Because she's [already] forgotten it.

Emilia Clarke stated that her mother had already forgotten the details  and didn't quite recall the ending, to which Colbert replied,

I'm kind of jealous of your mom,

If she falls asleep on a plane, I'm quite worried she's going to say it [talking in her sleep] and not know it happened,

When asked about the series itself, Emilia Clarke mentioned that she cried after reading the script.

I went for a very long walk... I couldn't quite handle that. It should have been raining, it was that kind of a moment,

While on the show Emilia Clarke also talked about the two brain aneurysms and brain surgeries that she went through while filming the series.

The Final Season for Game of Thrones will air on HBO on April 14.