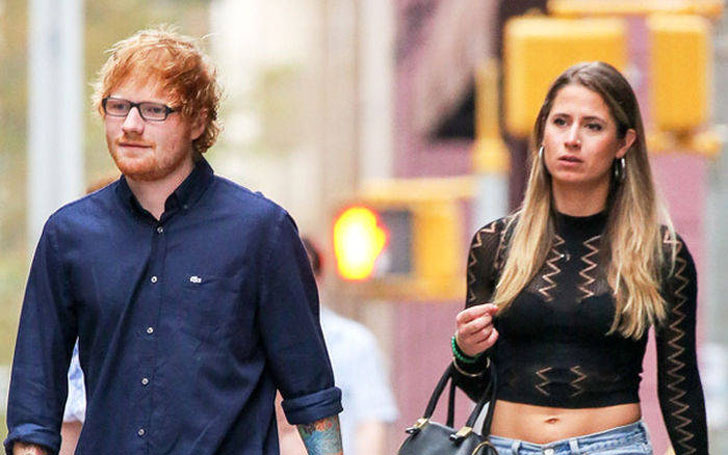 Congratulations!!! English singer Ed Sheeran and his longtime girlfriend Cherry Seaborn are engaged to be married!!! The Perfect singer announced the news with an adorable post via Instagram.

Seaborn was recently photographed wearing her new engagement ring in London. The couple started dating back in 2014 and is all set to get married.

The childhood friends turned lovers Sheeran and Seaborn who got engaged before the new year 2018 announced their engagement earlier on 20th January via Instagram.

Recently, Cherry showed the first glimpse of her engagement ring as she stepped out in London. She was spotted wearing a simple black jumper and black trousers and not to forget her sparkling diamond ring.

The Thinking Out Loud singer revealed his engagement with an adorable picture and caption.

Ed announced his engagement to Cherry over the weekend

"Got myself a fiancé just before new year. We are very happy and in love, and our cats are chuffed as well xx"

Sheeran, 26 and his bride-to-be Seaborn, first met when they studied at Thomas Mills High School in Framlingham, Suffolk.

Cherry later flew to America to attend Duke University in Durham, North Carolina where she completed her graduation in molecular biology. On the other hand, Ed remained busy in his music career.

The pair met again, and it looks like this time it is forever.

Sheeran opened up to Radio.com about his girlfriend and how she inspired him with his hit single, Perfect.

During the interview, he explained,

"I like the situation I’m in at the moment, it’s pretty great."

He wrote Perfect after the wild night he spends with his girlfriend at his friend and fellow singer James Blunt's Ibiza home. Sheeran said:

"We got really hammered and took our shoes off and danced on his lawn and then jumped in the pool, and then the next day I was like, 'That's a cool story,' so I put it in a song."

Sheeran went further and revealed that he never thought he'd find himself with someone from his high school days.

“I actually always thought I’d end up dating like an actress or something, someone in the industry. But I don’t think I’m that kind of person. I’m a hometown boy.”

The song peaked number one on the UK Singles Chart and the Billboard Hot 100 in December 2017.

In addition, Ed's Shape of You' is the most Shazamed song of 2017. Reportedly, he earned the title of 'Most Shazamed Artist of the Year' succeeding Sia's 'Cheap Thrills' which achieved the most tags in 2016.

"In many ways ‘Shape of You’ defined 2017. It spent fourteen weeks at the top of our Worldwide Chart after its release in January and it is still in our Top 40 today."

Further, his Castle on the Hill released in January 2017 broke the records in a number of countries debuting the top positions of the charts and became the first artist with his two songs debut in the top 10 in the same week.