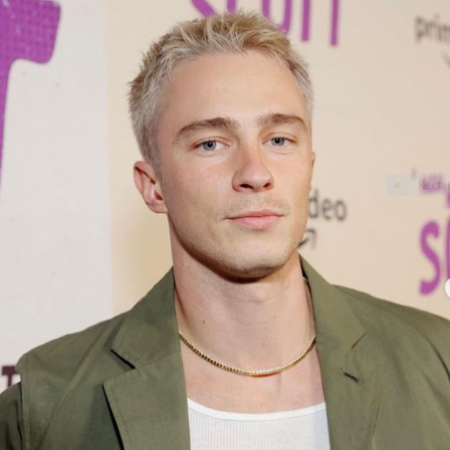 Active in the acting industry since 2014, it took years of hard work & dedication for American actor Drew Starkey to gain notable acclaim. Starkey is widely famous as the main cast Rafe Cameron of the Netflix series Outer Breaks (2020- Present).

Throughout his career, he has also worked in many series, including Valor, Good Behavior, Doom Patrol, and Scream. Moreover, he has records acting credits in critically acclaimed films such as Just Mercy (2019) and Love, Simon (2018).

Drew Starkey was born on 4th November 1993 in North Carolina, United States. He belongs to the white ethnicity and holds the American nationality. As of March 2021, Drew is 27 years old and has a height of 6 feet 2 inches (188 cm).

He is one of four kids of Todd Starkey and Jodi Ballard Hutto. He, along with two sisters, Brooke Starkey and Mackayal Starkey and brother Logan Starkey grew up in his hometown. 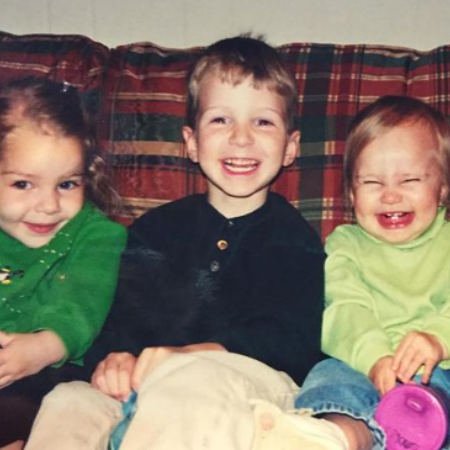 CAPTION: Drew Starkey with his siblings during his childhood SOURCE: Instagram @ drewstarkey

After Drew's parents separated, his mother Jodi married again & lives with her second husband, Brian Hutto. While his father, Todd, a basketball coach at Kent State University, Ohio, is low-key about his relationship status.

The American citizen completed his high school at St. Stephen High School, Hickory. After that, he enrolled in and graduated from Western Carolina University with a bachelor's degree in 2016.

Starkey made his television debut in the series Mercy Street in 2017. The same year, the actor appeared in a series including Shots Fired, Ozark, Dead Silent, Valor, and Good Behavior.

In 2018, the actor kickstarted his career in the feature film Love, Simon. He shared his screen space with Nick Robinson, Josh Duhamel, and Jennifer Garner. He also appeared in the movie The Hate U Give and the series Brockmire and The Resident in the same year. 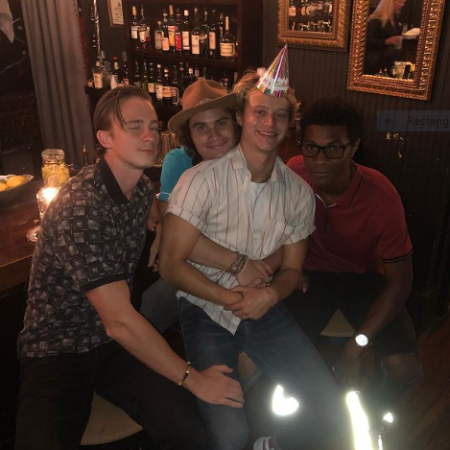 The actor Starkey was then cast in the recurring role in the television series Scream: The TV Series (2019) and worked in the critically acclaimed movie Just Mercy (2019).

The following year, in 2020, he appeared in the television series Outer Banks with the main role of Rafe along with Madelyn Cline, Madison Bailey, and Jonathan Daviss.

Starkey has been working as an actor for more than eight years since his acting debut in 2014 and records 30 acting credits. Throughout this period, not only did Starkey see a rise in his fame & acting approach, but also in earnings.

In the United States, the average salary of an actor is above $57,000 per annum. Besides, the actor Starkey also earns from online endorsement deals, sponsorship, and more. The actor resides in Los Angeles, California, and the median house price in that area is around $859,000.

Besides, Starkey has collected good money from movies and tv shows like Outer Banks, Love, Simon, The Devil All the Time, The Hate You Give, Scream, Just Mercy, Mine 9, Bounds, American Animals, and more.

Is Drew Starkey Dating Anyone?

Drew Starkey is not married yet and is also not dating officially as of 2021. The actor just started his career as an actor and is wholly focused on building them.

Although he barely misses any posts about his professional updates & friends-family moment, the American actor is quiet about his love life. Previously, he was rumored to date actresses like Claire Vander Linden and Rachel Fox Marie.

The actor Starkey's charming looks & acting success have garnered him over 3.1 million followers on his official Instagram (@drewstarkey).

Drew is active on Tiktok as well; he has 2846 Followers followers on his account, which goes with the handle @drewstarkey