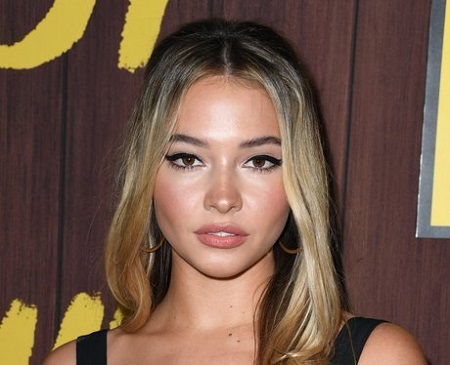 The American actress Madelyn Cline got her fame from the television series Outer Banks. The actress also appeared in a recurring role in television series Vice Principals and The Originals. She has worked on movies as well and some of her credits include films such as Savannah Sunrise and Boy Erased.

Born And Raised In South Carolina

Madelyn Cline was born on 21st December 1997, in Charleston, South Carolina, United States. She belongs to white ethnicity and holds the American nationality.

Madelyn is the daughter to parents Mark Cline (father) and Pam Cline (mother).  While she was just a kid she spent her summertime in New York working on television ads for T-Mobile and Sunny D.

She went to study at the Coastal Carolina University but dropped out of college and pursue her acting career.

Made Her Debut From Feature Film At The Age Of 14

Madelyn Cline made her feature film debut from the movie 23rd Psalm: Redemption at the age of 14. She appeared in two short movies Children of Wax (2012) and Bridge the Gap (2014).

She also appeared in Netflix television series Stranger Things in 2017, In the series Winona Ryder, David Harbour, and Finn Wolfhard had the main role. The following year, she showed her acting skill in the movie Boy Erased.

In 2020, she shared her screen presence with Chase Stokes, Jonathan Daviss, and Rudy Pankow in the series Outer Banks. Her movie Once Upon a Time in Staten Island and What Breaks the Ice will be released in 2020.

How Much Wealth Madelyn Cline Collected From Her Career?

Madelyn Cline has been working hard to achieve fame and fortune from her career. She has an estimated net worth of $1 million, as of 2020.

Is Madelyn Cline Dating Anyone?

Madelyn Cline in not officially dating anyone. The actress has just started her career and is solely focused on her career rather than involved in any relationship.

The actress has kept her romantic life a mystery and based on that, we can a s sume that she is single.