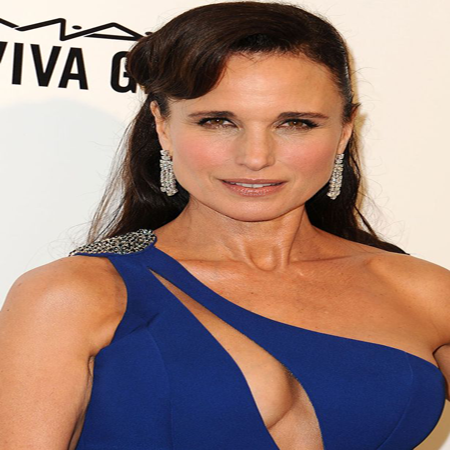 Andie MacDowell is an American actress as well as a famous model.  She is best known for her role in The Object of Beauty, Green Card, and Short Cuts movies. Andie won the Independent Spirit Awards for best female Lead in Sex, Lies, and Videotape.

Andie is the daughter of Pauline "Paula" Johnston and Marion St. Pierre MacDowell. Her father was a lumber executive while her mother was a music teacher.

She hails from a family of mixed ancestry, including English, Scottish, Irish, French and Welsh heritages.

Andie attended Winthrop University in South Carolina for two years. During her college days, she supported herself with minimum wage jobs.

In the year 1984, Andie debut with the British adventure movie Greystoke-The Legend of Tarzan, Lord of the Apes as Miss Jane Porter.

The next year, Andie appeared in American coming-of-age movie St. Elmo's Fire as Dale Biberman. Later she appeared in several movies and television series such The Secret of the Sahara, Hudson Hawk and much more.

Andie's most notable movies are Groundhog Day and Four Weddings and a Funeral.

Andie married for a second time to Rhett Hartzog on November 10, 2001. Her husband is a baseman and her childhood friend but unfortunately, they divorced on October 2004.

There was a news that Andie was engaged to an American businessman, Kevin Geagan in 2006, but they split up soon later.

The Object of Beauty actress, Andie MacDowell earns lots of from her acting and modeling career. Her current net worth is around $20 million.

Andie stands at the height of 1.76m/ five feet and eight inches and her weight is 54 kg. She has a huge fan following on her Instagram and Twitter accounts.