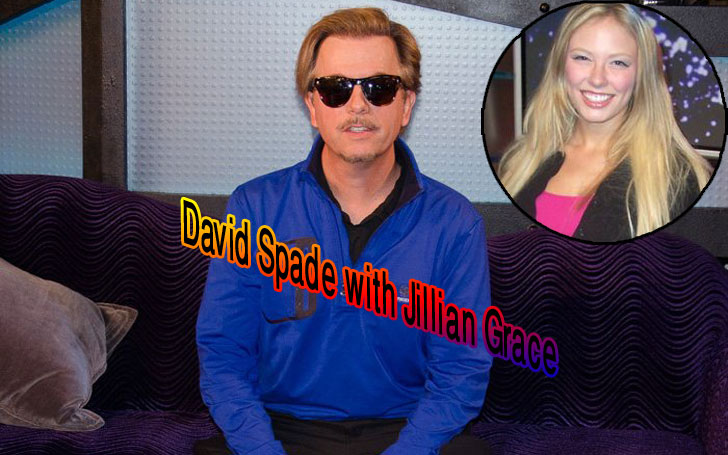 American stand-up comedian and actor David Spade is popular for his odd timings and different comedic style for both his stand-up material and acting. The comedian rocked the stage every time with his outstanding performance.

Besides his performance, the Grown Ups star gain a lot of attention due to his romantic connection with several high profiled celebrities.

Spade who dated many profiled celebrities before, what is his current relationship status? Is he dating anyone? Who is his current girlfriend? We have all the answers here, please scroll down to find out.

David Spade and Jillian Grace were once in a relationship in 2007. But, their relationship short-lived and they separated. However, Grace who is Playboy's Playmate in March of 2005 gave birth to a daughter, Harper in 2008 nine months after their break up.

According to a source, Harper was planned by both Spade and Grace. The source said:

'It was a mutual discussion, he told her that as he was getting older, it was something he was thinking about. And Jillian replied. ‘Are you sure this is something you want? It could happen!'

When Grace claimed that she is pregnant with Spade's child, fifty-two years old comedian told to TMZ at this:

'I had a brief relationship with Jillian Grace. If it is true that I am the father of her child, then I will accept responsibility.'

Is David Spade Dating Anyone? Know About His Dating History

David Spade was romantically linked with singer and actress Naya Rivera in April. The couple was first seen together on a dinner date at Catch L.A. in January. They made their first public appearance early April 2017 where they two were captured getting cozy at the Halekulani Hotel pool in Waikiki, Hawaii.

CAPTION: David Spade and Naya Rivera getting cozy in a pool SOURCE: eonline.com

A source revealed that the two were hugging and kissing in the pool with lots of body contact, according to live viewers:

"Outside of the pool, they sat on lounge chairs and talked animatedly. They spent about an hour poolside together.”

The source claimed that they are dating secretly since January. However, none of them confirmed their relationship with each other.

According to some online source, Spade and Rivera were first linked in 2004 while Rivera made her guest appearance on 8 Simple Rules.

Rivera is also a mother of a son which she shared with ex-husband, Ryan Dorsey. They ended their two years of marriage last November.

According to an article published by us magazine on 23 June 2017, David Spade and Naya Rivera are no more an item. The source revealed that they two broke up after a few dating for a few months and they have stopped following each other's Instagram.

Moreover, Rivera also liked her ex-husband Ryan Dorsey’s photos which may point towards something about reconciliation.

Spade was once in a serious relationship with actress Heather Locklear in 2006. And in an interview in July 2018, the actor said that he still loves her as she deals with her 'tough situation.'

Also See, David Spade Has Joined The List Of Burglary Victims. Drake, Nicki Minaj Are on the List

The actor has been involved in a number of relationship with many well-known personalities.