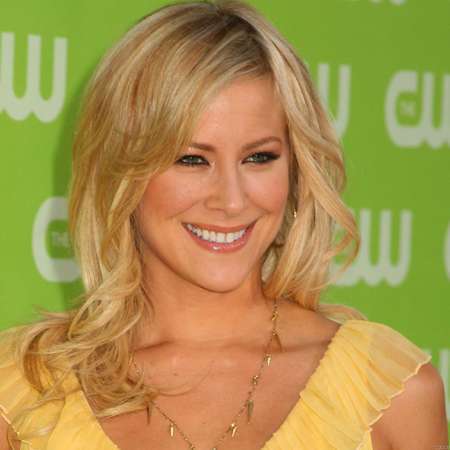 Her nationality is American, holds citizenship of the United States. Her star sign is Aries. Her ethnicity is White. She has twin sister Cynthia Daniel, who is an actress too and five minutes older than her. She has an older brother Brad Raylius Daniel.

Brittany Daniel attended Gainesville High School and completed her high school degree. From her early childhood, she has a great interest in singing, acting, and dancing. She used to participate in various dramas during her student life.

By the age the age of 11 along with her sister she was signed to the Ford Agency and began a modeling career. She also appeared in Seventeen and YM along with Doublemint gum ads as the Doublemint Twins.

Brittany Daniel made her acting debut in 1989 from the sitcom The New Leave It to Beaver. In 1992 at the age of sixteen, she was featured in short-lived syndicated teen drama Swan's Crossing. She was also featured in the main role in much other television series like The Game, It's Always Sunny in Philadelphia, North Shore. Daniel has also appeared in many TV films 111 Gramercy Park (2003), Totally Awesome (2006) and Community Service (2006).

She made her movie debut from The Basketball Diaries alongside with superstar Leonardo DiCaprio. She has also been part of many super hit Hollywood movies like White Chicks (2004), Rampage: The Hillside Strangler Murders (2006), Loveless in Los Angeles (2007), Skyline (2010) and Joe Dirt 2: Beautiful Loser (2015).

Furthermore, Brittany Daniel was featured in a thriller film named Skyline, in 2010, alongside Eric Balfour, Scottie Thompson, Donald Faison, and many others.

As of 2019, Brittany Daniel has an estimated net worth of $4 million, by celebrity net worth. Furthermore, her net worth is $3 million, as per the richest net worth.

In 2007, she honored with the New York International Independent Film & Video Festival for Best Actress for ‘Last of the Romantics’.

Talking about her personal life she is one of the sexiest women in Hollywood. She has been linked with many guys in the past; there was a rumor of her linkage with actor Tyrese Gibson.

Later the rumors were disappeared.  From 2000 to 2001 she dated John Corbett, their relationship did not last long and they broke up. In 2003 she dated actor David Spade for a year long.

In 2007, she dated actor and comedian Keenen Ivory Wayans. They were together in relation for about six years. Before their break up they seemed to be happy, they also used to attend a public event together. They were often seemed shopping together and hanging on the beach side. They broke up in 2014 the actual cause of break up is unknown. Similarly, she was also linked with Jay Ellis.

As of now, Daniel is in a marital relationship with Broker-Associate, Adam Touni, since July 2017.  Touni proposed Daniel when they were hiking at Tennessee Valley Cove in Marin County, and they got engaged in December 2016.

Besides acting and drama, her hobbies include rock climbing and rollerblading. She is an adventure loving woman and also a fan of cla s sical music.

This sexy actress has presented as one of the greatest fashion icons. She wears a perfect dress with matching jewelry. She has a net worth of a few million dollars.