Canadian filmmaker and former advertising executive, David Furnish is the husband of the famous English singer, Elton John. At the initial phase of his career, he used to work in an advertising agency, Ogilvy & Mather.

In 1997, Furnish made his directional debut from the movie, Elton John: Tantrums and Tiaras. He then appeared as a producer, director, and screenwriter in several movies like Women Talking Dirty, Kofi Annan, Fame, and Fashion: Inside Gucci. He also worked as an editor for Tatler magazine and is a regular columnist for magazines, GQ and Interview.

David Furnish was born David James Furnish on 25th October 1962 in Toronto, Ontario under the birth sign Scorpio. Furnish is Canadian as per nationality and ethnicity wise he is White.

Furnish is the son of Jack Furnish (director at the Bristol-Myers pharmaceutical company) and Gladys Furnish. He has an older brother, John and a younger brother, Peter. 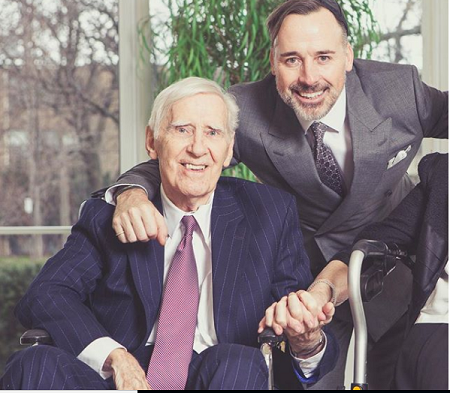 In 1981, Furnish graduated from the Sir John A Macdonald Collegiate Institute. During his schooling, he participated in several plays in productions of Godspell and Pippin. In 1985, he earned an undergraduate degree in Honors Business Administration from the Richard Ivey School of Business at the University of Western Ontario.

Soon after the graduation, David Furnish was appointed by the Ogilvy & Mather, an advertising agency. On request, he was transferred to London at the age of 27.

After shifting to London, Furnish became one of the youngest directors. He made his directional debut in 1997 from the documentary film, Elton John: Tantrums & Tiaras. His work in the movie was highly appreciated by the critics and fans. Two years later, he produced his first movie, Women Talking Dirty.

He also produced a TV show, Spectacle with Elvis Costello. In 2005, he produced a theater play, Billy Elliot the Musical.

Furnish also contributed as an editor for Tatler magazine and also worked as a regular columnist for GQ and Interview. 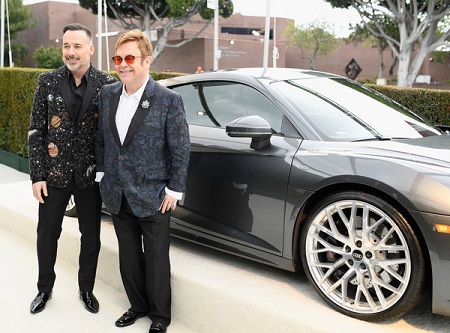 CAPTION: David with his husband, Elton John in front of their car. SOURCE: Zimbio

The couple has a collection of luxury car like

The couple also raised $40 million charity for preserving the planet. The couple’s foundation’s Academy Award party is mentioned as one of the most high-profile Oscar parties in Hollywood from which they raised over $200 million for charity.

Their foundation, Elton John AIDS Foundation is one of the world's biggest AIDS charity foundations.

David Furnish married his longtime partner, Elton John on 21st December 2014 in a private ceremony in London in the presence of friends and family. The couple met for the first time in 1993 and eventually started dating.  His husband described their first encounter saying,

‘’ I went back to my house in Windsor for a while. I wanted to meet new people so I rang up a friend in London and said, 'Could you please rattle some new people together for dinner here Saturday?' I was attracted to David immediately. He was very well dressed, very shy. The next night we had dinner.’’

In May 2005 John proposed to him at a dinner party in Old Windsor after being in a relationship for almost 12 years. In December, the couple became the first pair in the UK to enter into a civil partnership. 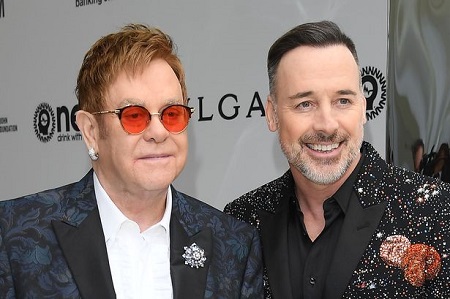 A few years later, they tied the knot after a change in the law of same-sex marriage. The couple became the parents of two children, Zachary Jackson Levon Furnish-John and Elijah Joseph Daniel Furnish-John via surrogacy. 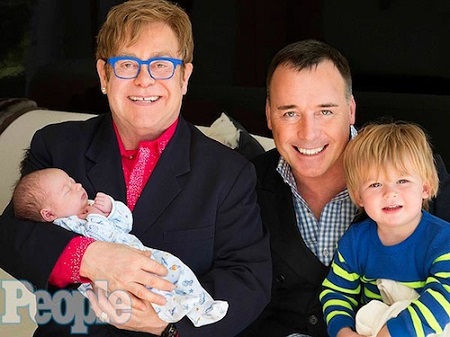 CAPTION: David with his husband and children. SOURCE: Belly Ballot

Their first son, Zachary was born on 25th December 2010 whereas, their second child, Elijah was born on 11th January 2013. Lady Gaga is the godmother of their two sons. Whereas, he and his husband are the godfathers of Brooklyn Beckham.

The couple is together for years without any rumors about their divorce and extramarital affairs. The two attended several ceremony and events together. On 30th January 2018, the couple attended the 60th Grammy Awards together.

The couple together worked for their Elton John AIDS Foundation to spread awareness about cancer. Besides, he is a leading advocate for gay rights and equality.

David Furnish is openly gay. During his early age, he was bullied and teased with different names like ''art fag'' and ''gay boy''. He says,

‘’ I was definitely teased and bullied in my junior school. I was neeeever a cool kid. I’m still not a cool kid. I still feel like a nerd.’’

Due to those reasons, he started living a double life, one with the group of straight friends and another with gay friends. He never mixed the two groups. Whenever Furnish talked about his sexuality to his mother, she always expressed worries about his future and cry but used to support him.

Furnish also dated several ladies thinking that he might not meet the right girl for him. He says,

‘’ I had a girlfriend, and I would leave her flat and go and have sex with a man afterward. It was not the most honest and healthy and happy way to be living your life.’’

‘’ I thought at the time that maybe I just hadn’t met the right girl (and) had the right sexual experience, where I would have felt more comfortable in my own skin instead of feeling awkward and clumsy and full of shame.’’

After he was transferred to London his life totally changed. He met his husband is living a happy life together.

Here is the video, where James Furnish talks about his sexuality struggle and his relationship: