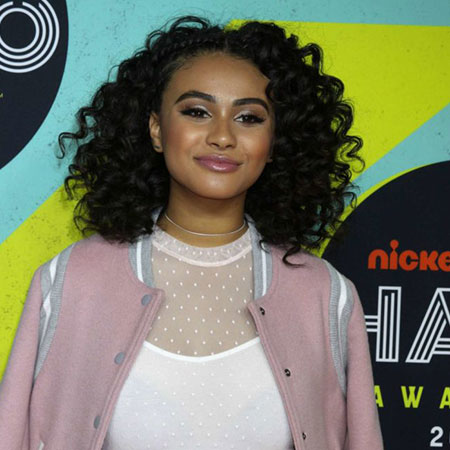 Born and raised in Anaheim, California, Daniella Perkins is an American YouTube personality, musical.ly star, and actor. She is a famous face in musical.ly where she has over 1.8 million followers. As of 2019, she has about 182k subscribers on her YouTube channel. As an actor, she has joined the main cast of Knight Squad.

Daniella Perkins was born on June 13, 2000, in Anaheim, California, the United States of America under the zodiac sign of Gemini. People who are born under this zodiac sign have the personality traits like sociable, communicative and ready for fun, thoughtful and restless.

Daniella has not disclosed any information regarding her parents and her educational background, however, some online tabloids report she was born at Anaheim Memorial Hospital. Daniella has a younger sister Devinity Perkins who is three years younger to Daniella.

Daniella started her career in 2008 starting a website WzTheBuzz with her sister Devenity. On their website, they used to critique and review landmarks around the city, interview people, comment on the hottest restaurants and stores. In 2011, Daniella registered the site as a business site.

Daniella later started working as an actor and made her appearance in a movie Senior Slashed in 2014. In 2015, she got an acting opportunity for a project Del Palya. Moreover, she also worked in television projects including Girls Meets World and Nickelodeon's Legendary Dudas.

Besides acting, Daniella is also famous for her appearance in musical.ly where she created the Musical.ly id PerkinSisters with her sister. The sister-duo started uploading their joint videos on their id. Soon, they became popular for their funny and creative dubbing.  In a short period of time, their video started getting lots of views and also garnered millions of followers.

Daniella and her sister Devenity are also renowned YouTubers who joined YouTube on October 10, 2014, under the channel name Perkins Sisters. As of January 2019, their channel has about 85k subscribers with a total view of 2,726,751. Their channel is packed with joint vlogs, Q&A sessions, sketches, skits, challenges, and girly stuff.

In the video shown below, Daniella and her sister Devenity eat a Canadian candy and give reviews on the candy.

Later on February 12, 2017, Daniella started her own self-titled YouTube channel. In this channel, it is packed with her personal vlogs, makeup tutorials, and travel diaries. Within six months, her channel gained more than 68,000 subscribers with 1 million views. As of January 2019, her channel has about 182k subscribers with a total of 6,949,820 views.

Daniella Perkins has the net worth of thousands of dollar. Daniella is a multitalented social media star who has earned a great amount of money from her involvement in the different professions.

As an actor, she has played in several movies as well as in many television shows. According to the source, the average salary of an actor is about $50,195 per year.

Besides, she also earns a good amount of money from her YouTube channel.

According to the social blade, a YouTuber like Daniella Prankins earns about $134 - $2.2k per month and $1.6k - $25.8k per yearly. Daniella is a pet lover, especially a dog. She has got two pet dogs and she always likes to play with them whenever she gets free time.

Daniella, aged 18 is currently single. Before going to the single status, she dated Marteen Estevez. Marteen and Daniella have not revealed when they met for the first time and how their relationship started. After dating for some time, the couple ended their relationship.

Besides Marteen, she was also in an affair with singer/rapper, and web sensation Zach Clayton in 2017. The then-lovebirds tried to keep their relationship away for the media for a while. Afterward, they revealed their relationship posting their cute pictures on social media.

Daniella's has even featured Zach on her YouTube channel. They spent lots of quality time together before their separation in September 2017.

when 2 exes hang out what do you get?...a youtube vid link in bio

You May Also Like: Colleen Ballinger, Jesse Wellens, and Markiplier