Multiple-award winner Damon Herriman is a renowned Australian actor who grabbed wide recognition for playing Dewey Crowe in crime drama series Justified. He is also known for playing Charles Manson in the film Once Upon a Time in Hollywood. His other successful projects are Judy & Punch, Elly & Jools and Mindhunter.

Damon Herriman was born on March 31, 1970, in Adelaide, South Australia, Australia, under the birth sign Aries. He is Australian by nationality and Caucasian by ethnicity.

His father, Noel Herriman, is an actor famous for his roles in Candy, Predestination, and Dirt Game. There is no information about his mother at the moment.

Damon was only eight years old when he started developing appearing in local television commercials.

Played Charles Manson in 'Once Upon a Time in Hollywood'

Damon Herriman made his television debut with the role of Frank Errol in the 1976 drama series, The Sullivans. Some of his early TV shows were Taurus Rising, Sara Dane, and The Flying Doctors.

In 1990, Herriman got his first film, Call Me Mr. Brown, in which he played the role of Bowser Boy. That same year, he was the main cast in the children's series Elly & Jools. 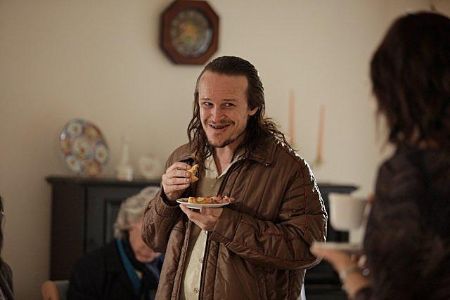 Once Upon a Time in Hollywood film scene SOURCE: ScreenCrush

He other notable roles are in projects like Water Rats, Love My Way, and House of Wax. From 2010 to 2015, he portrayed Dewey Crowe on the FX network Justified. In 2011, he made guest appearances in two television shows Breaking Bad and Wilfred.

Since 2018, Herriman has been starring as the main cast in Mr. Inbetween. His other on-going TV shows are Perpetual Grace, LTD and Lambs of God.

In 2019, Demon appeared as Charles Manson in the film Once Upon a Time in Hollywood alongside Leonardo DiCaprio and Emile Hirsch.

What is Damon Herriman's Net Worth?

49-year-old actor Damon Herriman has gathered a total net worth of $2 million, as of January 2020. He mostly receives a good amount of paychecks from his profession as an actor.

Here is the list of some of his hit movies and their budgets and box office collections.

As per indeed website, the Australian actor makes $33.94 per hour.

Damon Herriman is yet to be married. He has not also disclosed that if he is single or dating someone. He has yet to speak something about his relationship status so let's just wait until he gives us a statement about his personal life.

It seems Herriman is more focused on his career rather than starting an affair with a lady. He is currently busy working on his on-going television series.