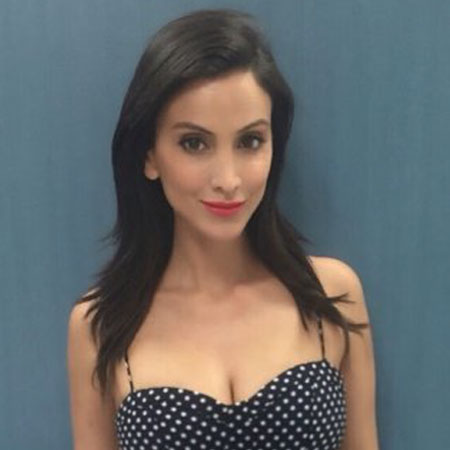 The versatile personality started her career as Jazz Club Girl in the Marvel’s superhero film Spider-Man 3(2007). She has also appeared in numerous television shows and movies. In 2017, she featured in a short film Hollywood Said No.

Crystal Marie Denha was born on 8 February 1984 in Detroit, Michigan, USA, under the birth sign Aquarius. She is an American by nationality and as far as her ethnicity is concerned, she is Hispanic. Her parents raised her with her elder brother, Chris Denha.

As a kid, she used to entertain her fellow mates with her performances. She was incredibly witty and bold from her young age. Once her teachers caught her performing in cla s s and instead of being mad or angry, they encouraged her to pursue a career in acting. It was her teachers who motivated her to join a local theater group. Later, Denha earned a degree in broadcasting.

Immediately after Crystal Denha completing her studies, she headed straight to Los Angeles, the United States to pursue her dreams of becoming an entertainer.  She starred in commercials for brands like Napster and Gillette. Denha also got a part in an Assyrian movie 'Cousins'.

After that, there was no turning back for Crystal Marie. She has since been on sketches in Funny or Dies channel on YouTube and been a s sociated with Yahoo as well. She was also featured in Kevin Hart's The Real Husbands of Hollywood.

Crystal Marie Denha has also worked for sports and entertainment news outlets like Holly scoop, ESPN, Fox News, and Top Rank Boxing. Similarly, she has also hosted shows like Sunrise Australia which is the top breakfast show in Australia, Yahoo's The Yo Show and What the F Facts.

Her presentation on the YouTube show; The Fumble was widely appreciated. Her TV credits also include The CW series Jane The Virgin (2015) where she shared the screen along with Gina Rodriguez, Andrea Navedo, Yael Grobglas, Justin Baldoni, and Ivonne Coll.

Her other works include Kevin Hart’s reality TV show Real Husbands of Hollywood. In 2017, she appeared in a short film Hollywood Said No.

Besides, she also tours the country as a stand-up comedian. She has performed in several places including New York's Carolines, Laugh Factory Comedy Club, and Hollywood Improv among others.

Crystal Marie Denha makes an impressive amount from her career. As of 2018, Denha has an estimated net worth of $2 million.

As per some online sources, American TV host averagely earns a salary that ranges from $48,539 to $200k. She is also a popular stand-up comedian and charges averagely $50 for each show. With such earning she is maintaining her lavish lifestyle.

She has worked for many sports and entertainment news outlets such as Daily Share, ESPN, Holly Scoop, Fox News, The Fumble and Rank Boxing. Denha has also hosted the show named ‘Sunrise Australia’ – one of the most popular mornings shows in Australia.

Crystal is quite active on several social media networks, including Instagram and Twitter, on which she regularly posts updates about her everyday life as well as regarding her career and her upcoming stand-up performances. She has also over 133K followers on her Instagram account as of Dec 2018 which is also the major part of her net worth.

Crystal Denha is an unmarried woman. Previously, she was seen kissing a mysterious man in one of her Instagram's post, but we don't know for sure if the man was her boyfriend.

In 2005, Crystal reportedly had an affair with adventurer Ronnie Faist. Their affair was short-lived and therefore nothing much is known about the relationship. She was also linked to Jamie Kennedy is an American stand-up comedian, television producer, screenwriter, and actor. The couple, however, reveals nothing regarding their relationship.

In 2017, she uploaded a tweet where she gave a hint about her boyfriend.

My boyfriend when I'm finally off my period pic.twitter.com/uQNV992ksY

The same year she flaunts a diamond ring on her ring finger all over her Instagram. In every picture, she showed her ring. She, however, has not revealed anything regarding her engagement.

Denha is active on Instagram where she flaunts with her colleagues and friends regularly. She is an avid adventure lover and love trekking, rafting, skydiving and other forms of adventures.

As of 2018, she dates no one and is not spotted with anyone so, she might be possibly single. She is the best friend of standup comedian Jonny Loquasto.