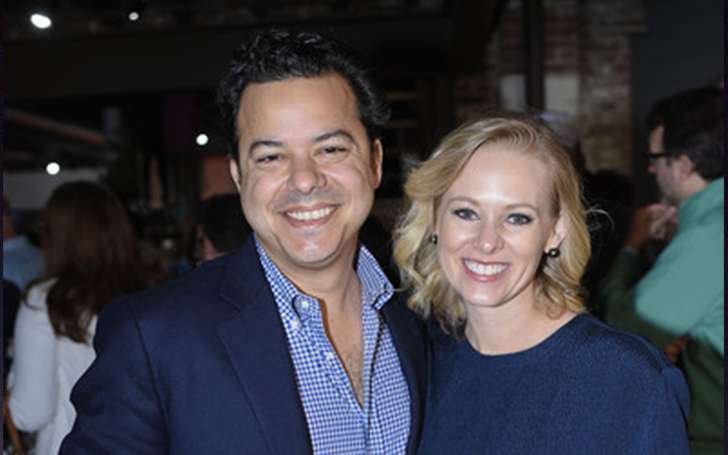 Margaret Hoover, an American political commentator, feminist, gay rights activist and, the writer, works at leading news network of the world CNN. She is blessed with a lovely family, a supportive husband, and mother of two lovely babies. Let's know more about her married life.

The journalist Margret is wedded to John Phillips Avlon, the editor in chief 'The Daily Beast 'and CNN political commentator, on 7 November 2009. Their marriage ceremony was held at Stanford Memorial Church in Palo Alto, Calif. Only a few guests were invited to attain their wedding celebration. All guest enjoyed their ceremony, one of the guest told NY Times.

Margaret and her husband John during their wedding ceremony

The couple has already celebrated seven years together, and their connection is going stronger. They are often seen spending quality time and attending many events together.

Margaret and John have two wonderful kids. The elder son, Jack was born on August 14, 2013. After some time, John twitted a thank you message for all wellwishers. In July 2015, the news of Margaret's pregnancy was covered by many news tabloids.

Later in October of the same year, she gave birth to a baby girl as her second child. She and John called her Toula. Their lives have delighted by the presence of their kids. Now, Jack is three years old while her sister is one-year-old and they often have a great time together.

Who is John Avlon?

John Avlon, an American journalist, and political analyst works as the editor in chief at 'The Daily Beast' and Political Analyst on CNN. John and Margaret, they both serve as a journalist in CNN. John has completed graduation from Yale University. Then, he served as a lecturer at Yale University for some time. After this, he moved to the journalism industry. He started to feature in famous TV shows of MSNBC, NBC, CNN, etc. Apart from this, he has also written a book titled 'A 21st Century Statesman'; published on 2011.

The gorgeous lady Margaret is a granddaughter of former U.S. President Herbert Hoover. She was influenced by her grandfather's political activities at the very young age. This led her to pursue a career in politics. Later, she graduated from Bryn Mawr College major in Political Science.

In her young age, she has worked in the white house for the administration of former President George W. Bush during his presidential time. She has also featured in several news tabloids. She made her TV debut in 2008 on Fox's 'The O'Reilly Factor.' Later she moved to CNN as a political commentator.

Apart from this, she also advocates for gay rights including gay marriage, arguing that individual freedom and marriage are conservative values. Also, she has also published a book in 2011 'American Individualism: .'How a New Generation of Conservatives Can Save the Republican Party.'