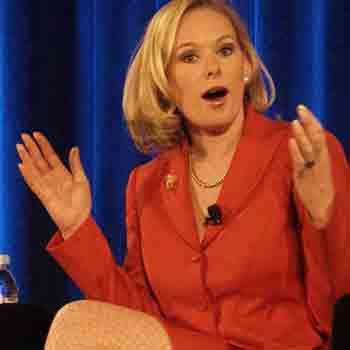 A very talented and beautiful Margaret Claire Hoover known as Margaret Hoover is a political commentator, political strategist, gay rights activist, and author. She is a popular and in-demand journalist. She is the best-selling author of the book American Individualism: How A New Generation of Conservatives Can Save the Republican Party published by Crown Forum in July 2011.

The media personality has been married to an American journalist, John Avlon since 2009. The pair shares two children; a son, Jack, born in 2013, and a daughter, Toula Lou, born in 2015.

Born in the year 1977 December 11 in Colorado, United States. She has an American nationality and belongs to the White-American ethnicity. She is born to a family that is active in the political field.

Margaret received her primary education at Garland Country School in Denver, Colorado, and has earned a B.A from Bryn Mawr College in 2001 in Spanish Literature with a minor degree in Political Science. She had attended Davidson College for two years and been a member of Warner Hall.

Margaret Hoover began to appear in media as a FOX News contributor from the year 2008 to 2012. She starred on Bill O'Reilly's top-rated show The O’Reilly Factor. It is a show where a range of topics from entertainment news to popular culture and American life and politics.

Politics was the highest-rated segment in the show. Besides, she has been the regular guest on Bill Maher's show Real Time on HBO, NBC’s Today, CBS’s Good Morning America, Shows of MSNBC, Fox News, CNN, C-SPAN, C-SPAN Book TV, and PBS doc u mentary.

Her articles on politics have also been published in national newspapers like Wall Street Journal, The New York Daily News, The Daily Beast, CNN.com, and FoxMews.com.

Margaret’s professional career highlights include working in the White House as the Associate Director of Intergovernmental Affairs for the administration of George W. Bush. She was also involved in Bush’s re-election campaign.

She was the Deputy Finance Director to Rudy Giuliani’s presidential bid in 2006-2007 and also had worked on Capitol Hill as a staffer for Congressman Mario Diaz-Balart. She has been the Advisor to the Deputy Secretary of the Department of Homeland Security.

She is on the Board of Overseers at Stanford University’s Hoover Institution and on the Boards of the Herbert Hoover Presidential Library Association and Belgian American Educational Foundation. She also is serving on the Advisory Council of the American Foundation of Equal rights and GOProud.

Margaret is also an advocate. She advocates for gay rights including gay marriage. She believes that individual freedom and marriage are conservative values. She had testified before the Maryland State Senate on behalf of gay marriage in 2011.

She has been active in the 2012 battle to win gay marriage in New York and had lobbied the New Hampshire legislators encouraging them not to repeal freedom to marry.

In 2013, Margaret helped to find the American Unity Fund, a non-profit organization to dedicate the advancing launch to cause the freedom of gay and lesbian marriage pointing freedom truly means freedom for everyone.

Margaret Hoover's Net Worth And Salary

Margaret Hoover's net worth is expected to be close to millions. Her net worth as per some sources can be believed to be around $1 million, in 2019. She is one of the highest-paid media personalities of the American media industry. She has been serving in this field for a long time because of which her net worth has considerably increased.

Hoover is paid over $54,000 a year as a conservative political commentator.

Going to her personal life, not much information can be found in most of the news is covered by her influencing career news and activities.

Besides her own identity, she is also known as the great-granddaughter of former U.S president Herbert Hoover. Her book titles “American Individualism: How a New Generation of Conservatives can save the Republican Party” has been the best seller.

She is also a committed one to renew the Republican Party to enable it to connect with the new generation of Americans. She is also involved in publicizing Herbert Hoover’s international non-governmental organization.

With such a look and tremendous talent, no one can just set aside without hoping and be dreaming of her. As the same, John Alvin, who was her fellow contributor at CNN, got into relation and later into the marital bond. They got married in the year 2009. Their marriage ceremony was held at Stanford Memorial Church in Palo Alto, Calif. Only a few guests were invited to attain their wedding celebration.

The couple is blessed with a child, a son, named Jack born in the year 2013 August 14. Margaret and her husband John are spending very quality time with each other and now welcoming their first child.

The happy couple is very understanding, cooperative, and supportive so both of them have successfully maintained their professional and personal life. Therefore, there is no dispute between this couple, and has no sign of getting a divorce.

For more information about Margaret Hoover, her fans can log onto her personal site as well as different other internet sites including Wikipedia, IMDb, etc which locates her biography, pictures, and many other articles related to her. Besides, she can also be followed on her Facebook and Instagram accounts. She has over 41.8 K followers on her Twitter account.

Margaret Hoover stands at the good height of five feet and 6 inches tall having a very pleasing personality and charming looks combined with her dazzling smile.

Her body features make her look decent and humble and she looks marvelous in any of the outfits she wears. She has a pair of long and slender legs that increases her charm. The combo of her talent and looks matches her as Beauty with the brain thing.