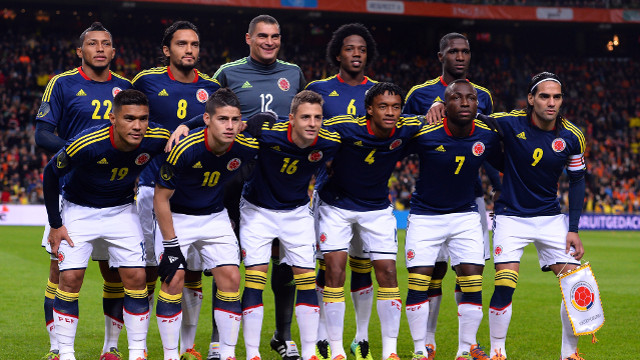 The Colombia National Football Team represents Colombia in the international football arena which is operated by Colombian Football Federation. The team are represented from the emblem of Colombian Football Federation / Federacion Colombiana de Futbon(FCF). It has a red football in the middle guarded by tri colors, RBG and the name of association. Currently ranked 8th on FIFA Ranking, the team is nicknamed as Los Cafeteros (The Cofee Growers) and Tricolor. The Team plays from CONMEBOL (South America) confederation. Jose Pekerman is the Head Coach of the team. The Colombian squad is captained by Mario Yepes. The Players will be decorated in the tricolor jersey with prominent yellow following its trend designed by adidas.

Colombia National Soccer team is in the group-C of the 2014 FIFA World Cup List along with Japan, Cote D’Ivoire and Greece. Colombia will be playing against these countries in the group in the Qualifier round for quarter finals in 2014 FIFA. Colombia has not received any major achievements in FIFA World Cup since its debut if you look upon the History. However, Colombian Team has gradually increased their performance making them one of the popular and passionate teams.