Colin Kaepernick Unemployed Even with NFL Season Ahead, Details About His Net Worth, Salary, Career and House 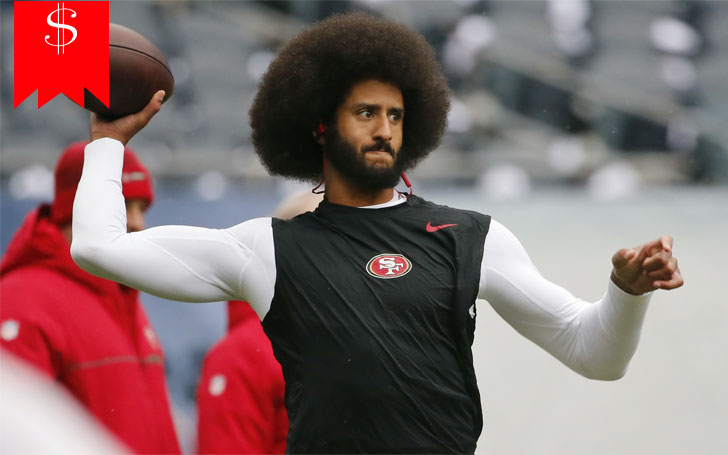 Colin Kaepernick is a former professional American football quarterback for San Francisco 49ers of the National Football League (NFL) who became more popular for his political stand. Kaepernick took the knee instead of a seat during the national anthem at last year's NFL season. He took the knee against police brutality and for racial justice in America, it sparked arguments regarding free speech, institutionalized racism and even respect for the military.

Kaepernick who is now a free agent is apparently unemployed as the NFL season comes closer, many are blaming the organization for purposely doing so as a message to all other players who might want to make a political statement in future.

In midst of all this hot debate including criticisms for having a Muslim girlfriend, Nessa, we're discussing Kaepernick's net worth, career earnings and everything money-related to him!

What is Colin Kaepernick’s Net Worth?

In 2019, according to celebrity net worth, Colin Kaepernick’s estimated net worth is around  $22 million, his hard work over the years has paid off well. Kaepernick made most of his money with San Francisco 49ers playing quarterback from 2011 to 2016.

Colin Kaepernick has over $22 million net worth from his short NFL career, however, his earning days with NFL seem to be coming to an end. With NFL season ahead, Kaepernick is still unemployed.

Seattle Seahawks' Doug Baldwin expressed his opinion on the matter to ESPN saying, “the situation last year [had] . . . anything to do with” Kaepernick’s continued unemployment.''

Baldwin has, however,  changed his mind after watching teams in desperate need of a backup quarterback but not hiring Kaepernick who helped his team ( San Fransisco 49ers) to Super Bowl. Baldwin changed his previous statement and said:

“After viewing what’s going on, I’ve got to take that back. I definitely think that the league, the owners are trying to send a message of, ‘Stay in between the lines.’”

Many other players and pundits also share the same opinion as Baldwin i.e Kaepernick is being punished for his activism.

Also Read, Former Quarterback Joe Namath's Net Worth Is Staggering!! Find Out how Much Has He Accumulated So Far?

San Francisco 49ers signed Kaepernick in 2011 NFL draft for $375000 along with a bonus of half a million dollars.

As per Los Angeles Times, Kaepernick recently sold his San Jose home for estimated $3.075 million, $180,000 over the cost price.

Colin Kaepernick bought the house in 2014 for $2.7 million and put the property under a massive renovation. He was able to make some profit after the sale.

It's a 4,569-square-foot Mansion that includes four bedrooms, 5.5 baths and a waterfall swimming pool with a jacuzzi.

In May 2016,  the three-time NBA champion signed a lifetime deal with Nike for a reported $1 billion.