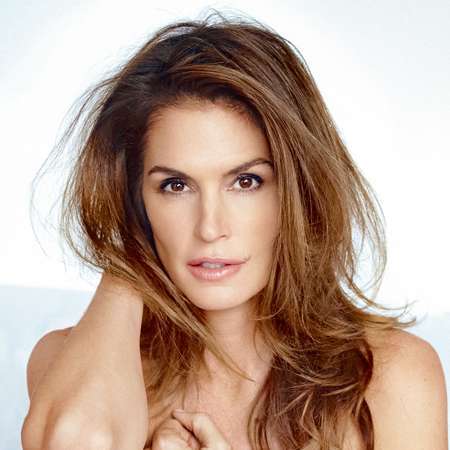 The 5ft 9 inches tall Cindy Crawford first got a staircase of success as a model. She has worked for a number of well-known modeling agencies and brands. Similarly, the model also graced the front pages of many reputed publications like British Vogue magazine, Playboy magazine, and more. She is also one of the most successful actresses.

Cindy is of English, German as well as French descent. She studied in the DeKalb High School and graduated as a valedictorian in 1984. She attended to study a degree in chemical engineering at Northwestern University after which she dropped out to pursue her career in modeling. She entered at the age of 17 in the Elite Model Management Look of the Year Contest, where she was the runner-up.

Cindy was then signed into the Elite Model Management, which started her modeling career. She worked for Victor Skrebneski and then moved to be signed in by the Elite New York Modeling agency after moving to Manhattan.

Cindy Crawford's modeling career has led her to be named as the highest-paid model by Forbes magazine and was named on 40 Hottest Hotties of the 90s in 1995 on number 3. Men’s Health named her as the 100 Hottest Women of All-Time and her mole above her lip is characteristic of her and he has appeared on several magazine covers throughout her career.

Cindy Crawford has earned a hefty amount of money from her profession as an actress and model. According to celebrity net worth, Cindy has an estimated net worth of $100 million, in 2019.

Cindy’s dating list has been the concern of tabloids for the past years. When she was becoming popular, she was rumored to be dating Robert De Niro. She started an affair with Richard Gere in 1987. The couple’s love grew and they got married in 1991. The relationship lasted just for a few years and they got divorced in 1995.

Crawford reportedly dated John Kennedy Jr. at around 1995 and Jon Bon Jovi was rumored to be dating her in the same year. Later she started a relationship with Val Kilmer. The relationship was short-lived and lasted only during 1996. From 1997she started dating Rande Gerber.

Just a year after the couple started their relationship, they tied the knot on May 29, 1998. Her spouse Rande is a former model and this couple has two children together. Their son Presley Walker was born on 1999, July 2 and daughter Kaia Jordan was born on 3rd September 2001. Both of their children have chosen their parents' career paths as they both the rising models.