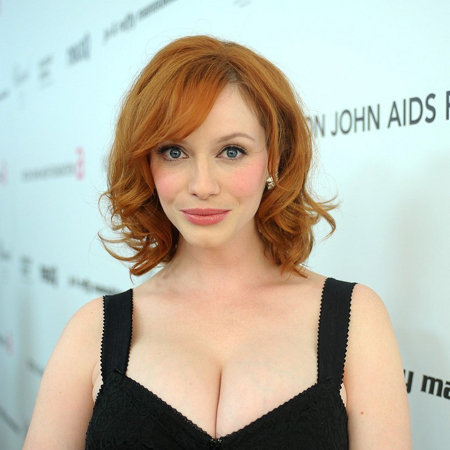 Primetime Emmy Award-nominated American actress, Christina Hendricks is popularly known for her role as Joan Holloway on the AMC's drama series, Mad Men. She is also popular for her role Beth Boland on the NBC's crime drama, Good Girls. Her role in Mad Men helped her to get nominated for several awards and won some of them as well.

Regarding her personal life, Hendricks is married to her actor boyfriend turned husband, Geoffrey Arend.

Christina Hendricks was born Christina Rene Hendricks in the year 1975 in a place called Knoxville which lies in Tennessee of United States of America under the birth sign Taurus.

Hendricks holds both American and British nationalities and as far as her ethnicity is concerned, she is Caucasian. Her parents Robert Hendricks and Jackie Sue Raymond raised her with her sibling named Aaron Hendricks. Her father worked for the United States Forest Service and was from England. Because of her father's profession, they had to move to several places including Portland, Twin Falls, and Oregan.

Her childhood was not as difficult as her father was a very well established man and she was from a very good family.

Regarding her academics, Hendricks attended Fairfax High School where she was bullied. As per her, she used to describe herself as a ''goth'' and ''outcast.'' At the age of 18, she appeared on the cover of Seventeen magazine and also signed a contract with a modeling agency. She then moved to New York City in order to pursue a career in an entertainment field.

Hendricks has been sensational in her career and her work in TV shows and movies is surreal.  She made her TV debut in 1999 in the TV series, Undresses as Rhiannon. She then appeared as Lily in a movie called La Cucina in the year 2007 and this can be taken as her debut role in movies.

Christina also appeared in a movie called Drive in the year 2011 and the name of the character she was playing in the movie was Blanche. Some other TV shows and movies to her credits till today include the likes of Fist Fight, The Private Fairy, ER, Miss Match and Las Vegas.

Particularly, her most charismatic work has been in Mad Men which starred Jon Hamm, January Jones, and Elisabeth Moss. She appeared as Joan Harris for which she has been nominated for several awards and won some of them. Some of her won awards include:

Moreover, some of her other nominated awards include Primetime Emmy Awards, Screen Actors Guild Award, and Golden Nymph Award.

Since 2018, Hendricks is portraying the character of a housewife, Beth Boland on NBC's crime comedy-drama TV series, Good Girls. She shared the screen with Manny Montana, Mae Whitman, and Izzy Stannard. The same year, she worked on the upcoming movie, American Woman.

Her upcoming project is Toy Stroy 4.

Christina Hendricks' Net Worth, Salary, And Major Source Of Income

According to The Richest, Christina Hendricks has an acc u mulated net worth of 8 million dollars whereas as per Celebrity Net Worth, her net worth is estimated to be $10 million, in the year 2019.

Furthermore, Hendricks worked in several movies that made an amazing box office collection. Here is the list of her hit movies:

At this age, the actress has already reached the summit of success and after being so successful, she is still very down to earth. She has been very successful in her career and this has given her great earnings and wonderful net worth.

Besides, she earns a good salary from her career. As per some online sources, a TV star earns an average salary that ranges from $150k to $1 million.

Christina Hendricks personal life has been as perfect as her career. She had an affair with her boyfriend turned husband Geoffrey Arend before the couple decided to get married and live happily as husband and wife. The couple got married on 11th October 2009 in a private ceremony attended by friends and families.

The loving couple celebrated wedding day dancing to the song The Origin of Love from the film Hedwig and the Angry Inch. It was the first song of their as a married couple.

''We've decided that we are not really interested in having children.''

Besides, Hendricks is a natural blonde but started coloring her hair red from the early age of 10 after being inspired by a book, Anne of Green Gables.

Check out the interview with Christina Hendricks: