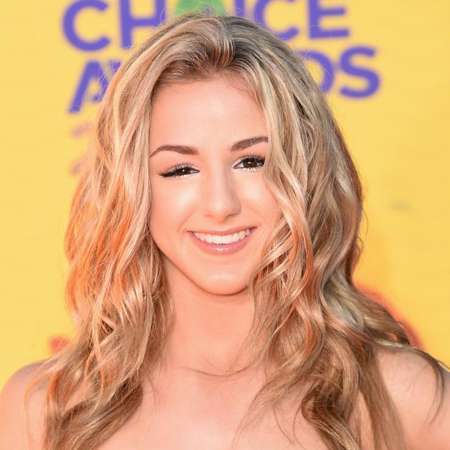 Chloe Lukasiak is a dancer of American nationality who at the age of 17 has become a television personality and celebrity after her appearance in the reality television series Dance Moms. A versatile personality, she is also a fashion designer and a model.

Chloe Lukasiak was born to her mother Christi Lukasiak and her father Marc Lukasiak on the 25th of May, 2001 in Churchill, Pennsylvania, the US. Raised as a Roman Catholic, Lukasiak was interested in the field of dancing from a very small age. She started getting training from the Abby Lee Dance Company at the age of 2.

Lukasiak has a younger sister of Clara Lukasiak who was born in 2009. She got a chance to compete as a part of the Dance Company throughout the United States of America. After winning numerous titles in regional as well as the national state, she was cast as a member of the reality Lifetime’s Show, Dance Moms.

Lukasiak holds American nationality and her ethnicity is White American.

The pretty child actress and dancer, Lukasiak is skilled in the contemporary, lyrical, ballet, jazz, hip hop, acro, Bollywood, and musical theatre genres. She appeared on the television show Dance Mom along with her mother. She also worked together with several other artists on the show which also included Abby Lee, Maddie Ziegler, JoJo Siwa, Nia Sioux, Mackenzie Ziegler.

She got a chance to appear in several music videos due to her appearance and consequent success on the show. After problems arose between Lukasiak’s mother and Dance Moms’ Miller the mother-daughter duo left the show in 2014. Chloe has since completed her training in dance from the Studio 19 Dance Complex and is pursuing her career in acting and modeling.

She has been cast as Gwen in the film Center Stage: Dance Camp and she also appeared on The Doctors. She has also modeled for the VIP Dance Events, Papier Mache, Tutu de Monde, and the Nation-Alist magazine.

Chloe Lukasiak has earned a decent sum of money from her career as a dancer and as an actress. As of 2019, her net worth is estimated to be around $6 million. She has also earned a good sum of money from endorsement. The average salary for an actress is around $53,000 a year.

The actress also earns a great amount of money from Instagram where she has over 6 million followers.

Chloe has also been running her self-titled YouTube channel where she has over 2 million subscribers as of 2019. It is also the major source of income as she can earn $8.2 K to $131.4 K a year.

In the year 2018, the actress also authored a book called Girl on Pointe: Chloe's Guide to Taking on the World.

As far as her personal life is concerned, Chloe Lukasiak, who is currently aged 18 is not dating any man as of present. Before going to single status, she was in a relationship with Ricky Garcia. Garcia himself revealed their relationship in 2015. They met at the Radio Disney Music Awards in 2015 and started dating shortly after. Chloe’s ex-boyfriend is an actor and a singer who stars in the Disney Channel’s Show entitled, Best Friends Whenever.

Apart from this, Lukasiak has never been known to be in an affair with anyone else. As far as the news of the tabloids is concerned,  the couple, however, ended their romantic relationship in 2016 after around a year of a relationship.