Chiara Ferragni is an Italian fashion blogger, designer, entrepreneur, and influencer who has worked with many fashion and beauty brands through her blog named The Blonde Salad. The fashion designer appeared in Making the Cut as a judge.

Chiara was born on 7th May 1987 in Cremona, Italy. She is 34 years old as of 2021. She was born to mother Marina Di Guardo and father Marco Ferragni. She grew up with siblings Valentina Ferragni and Francesca Ferragni.

Chiara’s sister Valentina is a dentist just like her father, and another sister Francesca is a social media personality. Her mother is a talented writer.

The entrepreneur studied law at Bocconi University but did not graduate. Besides this, there is nothing much disclosed about her childhood.

Chiara is 5 feet 9 inches tall and weighs around 55 kg. She has a slim-well-maintained healthy body.

Talking about Chiara’s current relationship status, the influencer is a married woman. She is married to Federico Lucia, who is an Italian rapper.

According to sources, Chiara and Federico started dating in 2016. The following year on 6th May, they got engaged. The pair announced the engagement during a concert in Verona. Later, on 1st September 2018, the duo exchanged the wedding vows in Noto, Sicily.

Before marriage, the pair welcomed their first child, son Leone Lucia on 19th March 2018, in West Hollywood, California. In October 2020, the duo announced that they were expecting a second child, a baby girl, via Instagram. The baby is due in late March 2021. 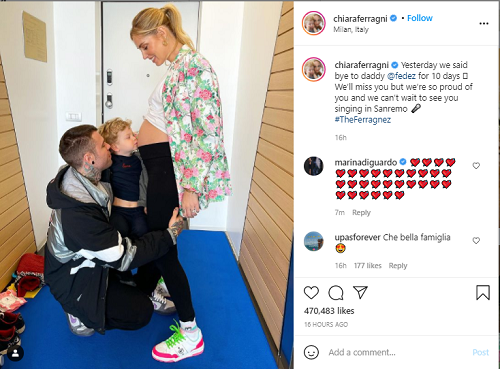 As of now, Chiara and Federico are happily married. The duo often shares pictures of each other on their respective social media accounts.

Talking about Chiara’s past affairs and relationships, she was previously in a relationship with her former boyfriend, Riccardo Pozzoli.

Chiara started her professional career in 2009. In October 2019, she began her fashion blog named The Blonde Salad with her ex-boyfriend Riccardo Pozzoli. New York, in March 2011, introduced her as one of the biggest breakout street-style stars of the year.

In December 2011, Teen Vogue profiled her as the Blogger of the Moment. During the time, she was studying law at Bocconi University. In December 2013, the fashion designer published an Italian language eBook under The Blonde Salad.

As a model, Chiara has modeled for Guess that was subsequently marketed as an advertisement campaign. Till the date, she has appeared in over 50 fashion magazine covers. Her blog and shoe line, Chiara Ferragni Collection, became a case study at Harvard Business School back in January 2015.

Regarding her achievements, she won Bloglovin’ Award for three consecutive years. Since 2013, Business of Fashion has listed her name in 500 most influential fashion people. Her name was listed in the Forbes 30 Under 30 in 2015.

In 2020, the blogger appeared as a judge in the television show Making the Cut. Esther Perbandt, Sander Bos, Jonny Cota, Rinat Brodach, Sabato Russo, and Martha Gottwald appeared on the show.

Chiara is a famous fashion designer, entrepreneur, blogger, and influencer who earns a hefty figure of money. As of 2021, Chiara Ferragni’s net worth is reported to be around $5 million.

Back in 2014, her business ventured grossed $8 million. She made most of the money from her Chiara Ferragni Collection footwear.