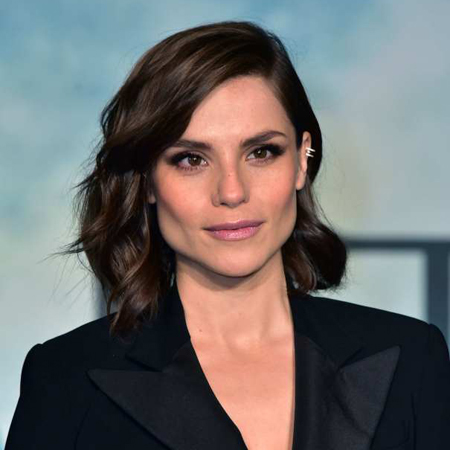 Charlotte Riley is a British actress. She is widely recognized for her portrayal of Sarah Hurts in Easy Virtue and as Catherine Earnshaw in the 2009 television adaptation of Wuthering Heights.

Charity is married to her longtime boyfriend, actor, Tom Hardy since 2014. The two are blessed with two children.

Charlotte Riley was born on 29 December 1981 in Grindon, County Durham, England. She is the daughter of an engineer, Michael, and a nurse & bereavement counselor Margaret. She was raised up in an upper-class family in Stockton-on-Tees, County Durham.

Riley has two siblings Joanne and Simon. She spent most of her early school years at Teesside High School from the age of 9 until 18. Soon after that she attended St Cuthbert’s, Durham University and graduated with a degree in English and Linguistics. At the time, she also performed in numerous Theatre productions and musicals with the Durham Revue.

Riley then went on to study at the London Academy of Music and Dramatic Art from 2005 to 2007. Regarding her ethnicity, she is a Caucasian and belongs to British nationality.

Charlotte Riley made professional acting debut playing the character of Chloe in an episode of the British sitcom, ‘Grownups,’ premiered in 2007. In the same year, she featured a guest character in ‘Holby City’ and ‘Inspector George Gently.’ But critics gave average reviews to the series.

The Following year, Riley went on to appear as Emma in the short film ‘Survey No. 257’. After that, she moved to big screen appearing in the 2008 British romantic comedy film, ‘Easy Virtue’. She portrayed Sarah Hurst in the movie alongside Jessica Biel, Colin Firth, Kristin Scott Thomas, and Ben Barnes.

Riley garnered immense fame for her major role as Catherine Earnshaw in 2009 telefilm, ‘Wuthering Heights’. She later went on to portray Maggie Summers in 4 of the episodes of the British drama, ‘The Take,’ in the year 2009. By the time, she also featured in another television film titled ‘Spanish Flu: The Forgotten Fallen’.

Riley made her appearance in the miniseries, ‘World Without End’ in 2012. In the miniseries, she featured the role of Caris Wooler which gained her significant attention. Riley then appeared in a thriller titled, ‘Entity’ in the fall of 2012. The movie became a massive hit and won two awards.

Riley made her debut on BBC Two appearing with the gangster series, ‘Peaky Blinders’ in October 2014. She also played the role of Nance in a 2014 American science fiction movie, Edge of Tomorrow. Riley was honored with the Sunday Times' Playwriting Award for Shaking Cecilia in 2004, which she co-wrote with Tiffany Wood.

The Easy Virtue actress Charlotte Riley is married to her boyfriend English actor, Tom Hardy, for three years. The couple is also blessed with one child.

Riley and Hardy first met each other on the set of a British TV adaptation of Wuthering Heights in 2009. They got engaged after a year of dating.

The duo finally tied the knot on July 4, 2014, in an intimate ceremony which was attended by their families and closest friends. The pair welcomed their first child, a boy in October 2015. She was  5 months pregnant after completing the filming of Close to the Enemy. The couple welcomed their second child a son Forrest in 2018.

As per reports, Charlotte Riley has made a lot of money from her acting career. According to Celebrity Net Worth, she has an estimated net worth of $8 million, as of January 2019.

One of her successful romantic comedy film ‘Easy Virtue’ went on to make $2.5 million in limited theatrical release in the USA and grossed a whopping box office collection of $18,463,608 worldwide.

Riley also featured in Edge of Tomorrow. The movie made a huge box office collection, grossing over $370 million in theatres worldwide whereas it was made under the budget of $178 million.