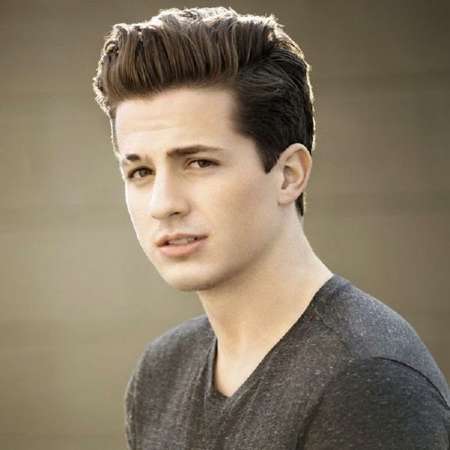 Charlie Puth is a good-looking singer, songwriter, and record producer who has achieved huge success at a young age. He came to the public attention after releasing the single See You Again as a tribute to late singer Paul Walker. The song is one of the most viewed songs on YouTube. In January 2016, his first studio album titled Nine track Mind was released which was a massive hit. In 2017, he has released two singles How Long and Attention from his upcoming album Voicenotes.

Charlie Puth was born in Rumson, New Jersey, United States, on December 2, 1991. He is an American by nationality and belongs to the White-American ethnicity.

Puth is the son of Debra Puth (her mother) and Charles Puth (his father). His mother is Jewish, while his father is Catholic. He was raised up and spent most of his childhood in Rumson, New Jersey.

His mother is a music teacher who also wrote commercials for HBO whereas his father is a builder and real estate agent. He has two younger siblings: twins Stephen and Mikaela.

At the age of twelve, Puth participated in a summer youth jazz ensemble in Red Bank. He joined Rumson-Fair Haven Regional High School and graduated from there in 2010.

Puth attended jazz piano major and classical minor classes at Manhattan School of Music Pre-College. He has graduated in music production and engineering on a full scholarship from the Berklee College of Music.

During his early days, Puth started the YouTube channel Charlie's Vlogs posting his own acoustic covers and comedy videos. Later in 2011, his career took a huge step when he participated and won an online video competition sponsored by Perez Hilton, Can You Sing? Puth covered Adele's Someone Like You along with Emily Luther. Popular Comedian and TV host Ellen DeGeneres was highly impressed by the cover, and she signed both Puth and Luther to her label eleveneleven in October 2011.

In 2012, he performed at supporting event DKMS Delete Blood Cancer, the world's largest bone marrow donor center. He later signed with Atlantic Records after he left eleven-eleven. Puth released two albums The Otto Tunes in 2010 and Ego in 2013. His hit songs are Some Type of Love, One Call Away. Besides that, he has also co-written several songs and jingles for fellow YouTubers including Shane Dawson.

In 2015, he signed up with Atlantic and released his debut single Marvin Gaye featuring Megan Trainor. The song became certified 2x Platinum in Australia and also topped the charts in Ireland, New Zealand, and America: It also peaked at number 21 on the Us Billboard Hot 100. Later, he released the song in 2015, entitled See you again featuring the superstar rap singer, Wiz Khalifa.

The song was a grand hit on the chart and is the most viewed song on YouTube. The song established his name to a higher level. The song was nominated for three Grammy Awards: Song of the Year, Best Song Written for Visual Media, Best Pop Duo/Group Performance. Puth released his first album Nine Track Mind on January 29, 2016. The album debuted at number three in America and peaked at number 6 on the Billboard 200.

Puth is a good-looking guy, the fact about his right eyebrow scarred is due to a dog bite when he was two years old. He is a great fan of the sport, and he likes Basketball. He also attends sports events.

Puth, age 25, is not married yet. He is not seen dating anyone publically. This handsome superstar has been linked romantically to a number of women. Recently, there were rumors about him dating an actor,  Hailee Steinfeld. She has not publicized any statements regarding the rumors.

In his recent interview, Puth wished that he could make a girl like Kendall Jenner his girlfriend. He also stated that he is a great fan of her. He was also linked with Meghan Trainor, but the rumors were refused by him saying there is nothing between us.

Charlie Puth's Net Worth and Salary

Puth currently resides in Hollywood Hills, which is listed for sale. He bought the property for $1.9 million in early 2016 and listed it for $2.09 million in August 2016. He has maintained an impressive net worth of $5 million.

Puth has earned a huge amount of money from his singing career. His song, See You Again was a grand hit. It had sales of 25,000 copies in the first week of the release in the U.S.