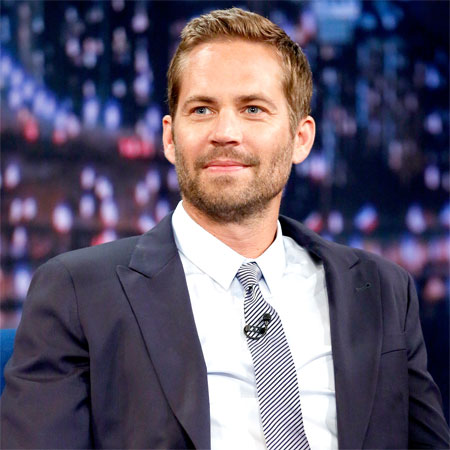 Paul Walker was an American actor who won the 2001 Hollywood Breakthrough Award for New Male Stylemaker for his role as Brian O'Conner in The Fast and the Furious. He had also appeared in other popular movies including Eight Below, Varsity Blues, Into the Blue, Timeline, Joy Ride and Running Scared.

Walker had a daughter, Meadow with his girlfriend, Rebecca Soteros. He died in a tragic car accident on November 30, 2013.

Paul Walker died at the age of 40 in a tragic car accident. On November 30, 2013, when Walker along with his friend, Roger Rodas left for Walker's charity event, their car crashed into a concrete lamp post and two trees and caught fire.

Walker was born to Cheryl Crabtree, a fashion model and Paul William Walker III, a sewer contractor and a fighter. He had three younger siblings, Caleb Walker, Ashlie Walker, and Cody Walker.

He graduated from the Sun Valley's Village Christian School in 1991 and joined several community colleges in Southern California, majoring in marine biology.

Even though Walker had a genuine interest in marine biology, he realized that he was more passionate about acting and decided to pursue acting as a full-time career.

Paul Walker began modeling as a toddler and starred in a TV commercial for Pampers. As he grew up, he landed roles in TV series such as Highway to Heaven, Charles in Charge, and Who's the Boss.

Walker made movie debut in 1986 after being selected to play the role of “Professor" Bennett in the horror/comedy movie Monster in the Closet. The following year he appeared in The Retaliator(aka Programmed to Kill), a low budget cyborg action film.

In 1993, he played Brandon Collins on the CBS soap opera The Young & the Restless. His good looks and acting skills earned him a nomination for Outstanding Lead Actor in a soap opera at the Youth in Film Awards.

After appearing in movies including Varsity Blues, She's All That, and The Skulls; he was chosen to play the protagonist; undercover cop Brian O'Conner in the action movie The Fast & the Furious, the first movie in the franchise.

He co-starred with Vin Diesel who would become one of his best friends over the years. The movie proved to be a big commercial success and spawned various sequels in which Walker reprised his role.

In 2005, he appeared in the action movie, Into the Blue in which he paired opposite Jessica Alba. The movie, however, was a box-office flop and received negative reviews.

He then portrayed a reformed criminal on parole who gets a second chance at life and begins work at the psychiatric hospital in the thriller movie The Lazarus Project in 2008.

Walker began the year 2013 on a good note and appeared in various movies including Fast & Furious 6, Vehicle 9, and Pawn Shop Chronicles. He was in the midst of filming Furious 7 at the time of his untimely death in 2013, November.

Paul Walker had an estimated net worth of $25 million in 2014. He left £18 million fortune to his daughter, Meadow after his death. In 2001, he charged $1 million for Fast and Furious but after the success of movie he priced $7 million for its sequel.

Walker's fellow friend, Rodas also died in the car accident with him and his daughter; Meadow was awarded £7.69 million ($10.1 million) in 2016 by the estate of Rodas settlement.

Paul Walker was in a relationship with his one-time girlfriend, Rebecca McBrain. The couple shared a daughter, Meadow Rain Walker; she lived with her mother until she turned 13 and in 2013 she moved to California to live with his father, Walker. She is the godchild of Vin Diesel. Walker was dating Jasmine Pilchard-Gosnell at the time of his death.

In 2006, he joined the board of directors of The Billfish Foundation. He got a chance to fulfill his lifelong dream to work on National Geographic Channel series Expedition Great White which later retitled as Shark Men. In 2010, Walker supported the Chile, earthquake victim.

He shared a good bond with his 2 Fast 2 Furious co-star Tyrese Gibson, and he considered Vin Diesel as his brother in both on and off screen.

Paul Walker died at the age of 40 in a tragic car accident. On November 30, 2013, when Walker along with his friend, Roger Rodas left for Walker's charity event, their car crashed into a concrete lamp post and two trees and caught fire.

Rodas died due to multiple trauma whereas Walker lost his life because of the combined effects of trauma and burns. Due to the burns, their bodies were beyond recognition.

His body was cremated, and his ashes were buried at Forest Lawn Memorial Park. He died in the middle of the shooting of Fast and Furious 7. So, his body double was used in the movie. Later, Walker's daughter in September 2015, filed a wrongful death lawsuit against Porsche for the death of her father. She claimed that Carrera GT had numerous design defects including a history of instability and that its seat belt placement can cause harm upon impact. They reached an agreement later on.