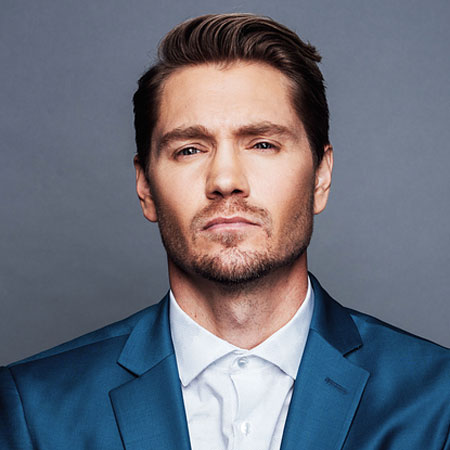 Multiple time Teen Choice Award-winner Chad Michael Murray is a successful American actor. He is well known for his significant characters on the TV shows Dawson’s Creek and One Tree Hill. Besides, he is also a spokesperson, writer, and former fashion model. Murray also starred in Freaky Friday, A Cinderella Story, and House of Wax.

Murray appeared on the cover of a number of popular magazines, including People, Entertainment Weekly, and Vanity Fair.  Not to mention, Murray out of his career has already earned himself financial stability. In fact, he has already accumulated a net worth in millions. He is also a family man and is married to his girlfriend Sarah Roemer since 2015.

Chad Michael Murray was born on  August 24, 1981, in Buffalo, New York, USA. His father's name is Rex Murray who worked as air traffic controller. When he was just 10, his mother abandoned him which was the major reason why he took the role of Lucas Scott. He is American as per nationality and is  White American by ethnicity.

Murray has three brothers  Rex, Nick, Brandon, and has also a sister Shannon.  His step-brother's name is Tyler. She also has a step sister and a half-brother.  As he grew up in a middle-class family, he started working from the age of 10 delivering newspapers. He then worked as a janitor at a local doughnut shop at the age of 14.

He attended Clarence High School in Clarence, New York and while there he developed an interest in literature and used to play football.  At the age of 18, he broke his nose and had to undergo a surgery to fix it. Later, in his career, it was rumored that he had a nose job which he clarified in a 2014 interviews saying,

"I got jumped in a Burger King when I was 18 and had my nose put on the other side of my face. It was three guys – what the hell was I supposed to do? The doctors didn't even bother running X-rays. They just reset it. But it wasn't a nose job – I hate the fact that people say it was a nose job!"

In 1999, Chad Michael Murray moved to Hollywood and started working as a model for clients such as Gucci, Tommy Hilfiger, and Skechers. Later, Murray made guest appearances in Diagnosis: Murder and CSI: Crime Scene Investigation too.

In 1999, Murray played the role of Tristan DuGrey in the WB serial, Gilmore Girls. He made his film debut playing a supporting role in the 2003 film, Freaky Friday appearing alongside Jamie Lee Curtis and Lindsay Lohan. The movie became box office hit, earning a total of $110,222,438 in the United States alone.

Murray starred in the WB TV movie, The Lone Ranger, in 2003. The following year, he appeared in the romantic comedy film, A Cinderella Story opposite Jennifer Coolidge and Hilary Duff. The movie also did well commercially.

In 2005, Chad Murray made an appearance in the American-Australian horror film House of Wax. The movie grossed $12 million on its opening day and made a total box office collection of $70.1 million worldwide. In addition to his contribution to TV and film, Murray has also done some music videos. He featured in Alicia Keys' music video for the song, Un-Thinkable (I'm Ready). The video received the Outstanding Music Video at the 42nd NAACP Awards.

In 2010, he was cast alongside Christina Milian and Ashley Benson, in a television film, Christmas Cupid. He appeared in Fruitvale Station in 2013. The following year, Murray portrayed Cameron Buck Williams in the film, Left Behind, which was panned by the critics.

Murray wrote a novel under the title Everlast which released in September 2011. He published American Drifter: An Exhilarating Tale of Love and Murder, in 2017 along with Heather Graham.

Murray also received a number of awards and nominations for his mind-blowing performance in the hit series One Tree Hill, including two Teen Choice Awards. He also won Teen Choice Awards in Choice Movie Actor: Drama and Choice Movie: Breakout Actor category for House of Wax and Cinderella Story respectively.

Murray is the proud owner of Mercedes Benz G, worth around $107,000. Previously, he also did several commercials as a fashion model. As of September 2016, the national average salary for a professional fashion model in the USA was $662,380. Therefore, it can be assumed that the former fashion model also earned somewhere around the amount.

Murray also designed the holiday season hoodie which costs around $40, and judging by his fame we are sure he has sold over millions of this hoodies which also adds up to his net worth.  Here is the list of his successful movies.

Chad Michael Murray has been married twice. He first married his girlfriend Sophia Bush on April 16, 2005, after getting engaged in May 2004. The couple tied the knot in an intimate ceremony which was organized at Santa Monica, California.However, they didn’t last long and separated in September 2005. The couple finalized their divorce in December 2006.

Following their divorce, he was briefly in a relationship with Kenzie Dalton. The couple first met in 2005. Murray and his girlfriend Dalton got engaged in April and called off their engagement in August 2013.

He was romantically involved with his Left Behind’s co-star, Nicky Whelan in October 2013. The relationship between them came to an end after around a year of dating.

After many unsuccessful relationships, Murray began dating with his Chosen’s co-star, Sarah Roemer, in the year 2014. In January 2015, the couple announced their marriage and news about expecting their first child. But according to some reliable sources, the couple tied the knot in 2014. They welcomed their first child, a son on May 31, 2015.

[ CAPTION: At the premiere of John Wick: Chapter 2 in Los Angeles ][ SOURCE: dailymail]

Roemer gave birth to their second child, a daughter in March 2017. They are currently living happily in Wilmington, North Carolina along with their two kids.

Murray’s favorite fashion accessory is a hemp necklace. He is a big fan of the Buffalo Bills. He is an avid reader and one of his all-time favorite books is "Catcher in the Rye" by J.D. Salinger.

Besides, Murray is also an avid animal lover and has three dogs; a shepherd/wolf mix name Joe, a Chihuahua/Pomeranian mix named TumTum, and a guard dog named Axel. His favorite movie is Fight Club and TV series The Simpsons.

He loves to workout, play basketball, and football. His favorite musicians are Dave Matthews Band, Incubus, and Pete Murray.

Here is video of Chad Murray in Steve TV show,