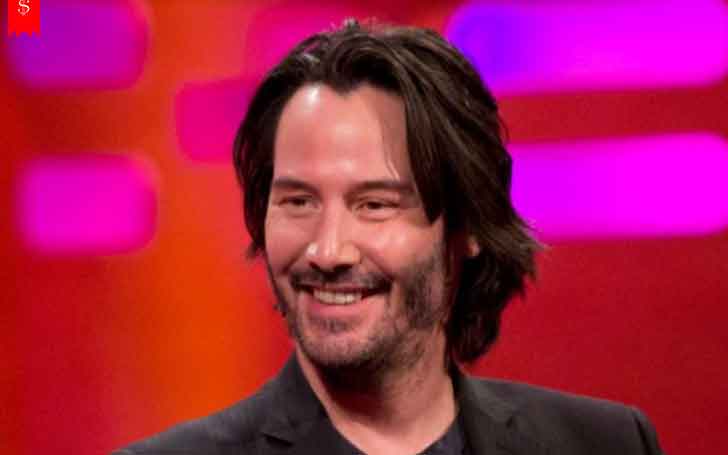 Keanu Reeves is one of the biggest names in Hollywood. He rose to fame after portraying Neo in the successful sci-fi movie The Matrix (1999). He later appeared in numerous movies and endorsed several brands like Coca-Cola and Kellogg.

He made his fortune from enacting in many hit movies including Point Break, Bill & Ted’s Excellent Adventure, The Matrix Trilogy, and Speed. With so much going on his career, here is all you need to know about his net worth including earning sources, assets and charity works.

Hollywood superstar Keanu Reeves’ estimated net worth is $360 million, as per the Celebrity Net Worth as of September 2018. He has accumulated this amount of money from his numerous hit movies and series.

The fast-growing star was launched into A-list status following the success of the 1994 action film Speed. The film won two Oscars and grossed over $350 million worldwide. His several films became successful in the Box Office.

His movie The Matrix trilogy was a huge success at the Box Office. He received a $10 million salary in the first part. His salary massively hiked up to $35 million in the sequel of The Matrix.

The second and third installment of the film made a tremendous box office collection and earned $742 million and $427 million respectively. He received a total $114 million (salary plus a share of profit) from the Matrix trilogy only.

Over these years, he has endorsed several brands like Kellogg's Cornflakes, Suntory Reserve, and Coca-Cola. From endorsing these world-famous brands, he brings a decent amount of money every year. Here are the collection of his biggest hit movies at the Box Office.

One of the iconic actor Keanu Reeves lives a lavish life. In 2013, he purchased a Hollywood Hills house for $4.5 million. The lavish mansion features 4 bathrooms, 4 bedrooms, and a swimming pool. He previously lived in another mansion in Hollywood Hills worth $5 million.

Keanu Reeves is fond of motorcycles and cars. He bought his first car British racing green Volvo 122 when he was 17. Later in 1987, he purchased a bike 1973 Norton Commando which is still in his garage.

After a few years, he purchased a Porsche 911 and it was his first custom-made vehicle. He still drives this car which cost him $85,295.

In 2005, he purchased a Harley Davidson for $28k. After five years, he bought another bike West Coast Chopper for $50K.

Keanu Reeves is also a philanthropist. He has engaged in many charity works for a long time. He initiated the anonymous cancer charity organization. In 2014, Reeves said in an interview that his sister Kim had suffered from leukemia for more than a decade. That inspired him to fund a cancer charity.

Reeves has also supported numerous organizations all over the globe including Stand Up to Cancer and PETA. In an interview, he once said that:

Money is the last thing I think about. I could live on what I have already made for the next few centuries.

He gave nearly $80 million to make up artists and special effects staff from the Matrix franchise- from his total income of $114 million earnings from The Matrix’s second and third installment.

In 2008, Paparazzo Alison Silva sued him in Los Angeles Superior Court claiming that Reeves hit his Porsche car and injured him. The lawsuit was settled after one and half year and he paid $711,974.

In 2014, two stalkers passed through his Hollywood Hills home. He found a lady at his library and called the police. She claimed that she was there to meet him but he denied and asked the Police to arrest her.

After three days, another stalker entered his home through a gate that was left unlocked by a cleaning company. The stalker took a shower in his bathroom and swam naked in his pool. The cleaning crew found the stalker and alerted Reeves. He eventually called the police and the stalker was taken into custody.

Keanu Reeves has been in Hollywood for over 3 decades. He began his professional career at the young age of 15 in the Lah Posluns Theatre in the stage production of Romeo and Juliet. After that, he received a small screen role in CBC’s TV series Hangin’ In.

In the early 1980s, he did commercials for several brands like Coca-Cola, short films like One step Away and stage show Wolfboy. He then hosted the Canadian Broadcasting Corporation youth TV show Going Great in 1984.

He made his first big-screen appearance in the drama film River’s Edge. He then played Ted Logan in the movie Bill & Ted’s Excellent Adventure in 1989. Next, he featured in an independent film My Own Private Idaho opposite River Phoenix.

In 1991, he appeared in a crime-thriller film Point Break alongside Patrick Swayze, Gary Busey, Lori Petty, and James LeGros and Lee Tergesen.  Here are the amazing facts you never knew about Keanu Reeves.

After almost fifteen years of struggle in  Hollywood, his major breakthrough came in 1999 when he played Neo in the blockbuster hit The Matrix alongside Laurence Fishburne, Carrie-Anne Moss, Heavy Weaving, Gloria Foster, and Paul Goddard.

The film received positives reviews and became hugely successful at the Box Office. He later reprised his role in the second and third installment, The Matrix Reloaded (2002) and The Matrix Revolutions (2003).

During his career, he has received several accolades and is widely considered one of the best actors who has never won an Academy Award. Reeves was honored with several awards including: