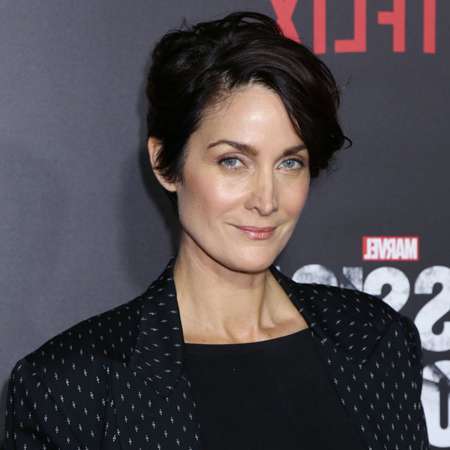 Carrie-Annie Moss, Canadian actress and former model, was born on 21 August 1967 in Burnaby, British Columbia, Canada to Melvyn and Barbara Moss. She is the younger sister of Brooke. She is Canadian by nationality and belongs to German-English ethnicity. Moss is famous for her roles in The Matrix, becoming her breakthrough film and the neo-noir psychological thriller Memento, in which she as starred. She also appeared in Red Planet, Chocolate, Snow Cake and much more.

Carrie-Annie Moss joined Vancouver Children's musical theater when she was just 10 and later in her senior years, she went touring around Europe along with the Magee Secondary School Choir. In 1987, when she was 20 years old, she moved to Europe in pursuit of her dreams of becoming a model.

Carrie-Annie Moss's first appearance on television is in the drama series Dark Justice. In 1992, she moved to Los Angeles from Barcelona with the series and after she returned she joined the American Academy of Dramatic Arts in Pasadena. As a model, she starred on Fox's short-lived time soap opera Models Inc. a byproduct of Melrose Place.

Carrie-Annie Moss in 1999, starred in the box-office success movie The Matrix, taking the role as Trinity for which she is globally known. She then received a recurring role in two sequels of The Matrix Revolution and The Matrix Reloaded, as well as provided her voice for the video game Enter the Matrix and the animated franchise The Animatrix.

Carrie-Annie Moss, at the same time,  appeared in the Canadian-made TV series called Matrix, which is unrelated to the others. After the released of The Matrix, she starred in the Disney mobster comedy The Crew, opposite Richard Dreyfuss and Burt Reynolds. Moss starred in Warner Bros' Red Planet alongside Val Kilmer and later appeared in the Miramax films' Chocolat directed by Lasse Hallström, the film was nominated for Oscar award.

Moss is 5 feet 8 inches in height and married to an actor Steven Roy in the year 1999. She and her husband shared two sons and one daughter named Frances Beatrice, Jaden Roy, and Owen Roy. She is the founder of Annapurnaliving, an online lifestyle brand which aims in elevating and empowering women to live in mindfulness and devotion.

Moss is currently living with his husband and children in their house somewhere in the US. So far, no news on the couple's relationship has been mentioned and seems that they are sharing a good chemistry. Moss' successful career and devotion to her works had given her a net worth of $3 million USD with a large amount of salary.