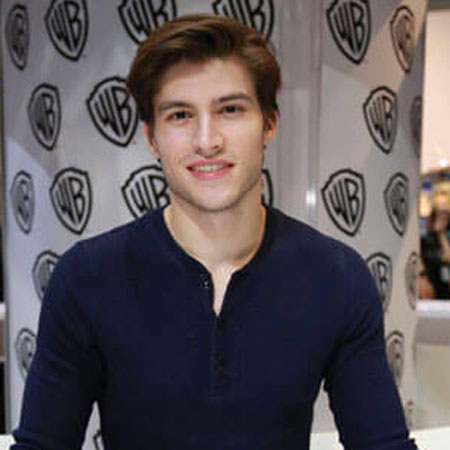 British-American actor, Cameron Cuffe is well-recognized for his role as Seg-El (superman's grandfather) in the TV series, Krypton through which he rose to fame. Cuffe made his acting debut from the short film, Home Made. His other works include The Halcyon and Florence Foster Jenkins. Along with acting, he also voiced in several video games.

Cameron Cuffe was born Cameron Charles D. Cuffe in April 1993 in Hammersmith, London. Cuffe is British by nationality and ethnicity wise he's Mixed (Half Irish and Half Italian descent).

Cuffe is the son of an American father, Dana Cuffe and a British mother, Caroline Cuffe. He has two brothers, Jamie and Alex Cuffe. He has a Bachelor degree in Acting.

Cameron Cuffe made his acting debut in 2015 from the short film, Home Made. The following year, Cuffe acted as Gino in socialite and amateur soprano, Florence Foster Jenkins directed by Stephen Frears.

In 2017, Cuffe worked in ITV’s TV series, The Halcyon with Hermione Corfield, Edward Bluemel, Kara Tointon and Jamie Blackley among others. As of 2018, he worked in TV series, Krypton with Georgina Campbell, Ian McElhinney, Rasmus Hardiker, Elliot Cowan and Wallis Day. He rose to fame for his acting in the TV series as Superman’s grandfather.

Cuffe also voiced in several video games, such as Steep, and Need for Speed Payback.

Cameron Cuffe has an estimated six-figure net worth but the amount is still under review. His 2016’s movie, Florence Foster Jenkins earned $44.3 million at the box office, made with the budget of $29 million. IMDb rated the movie 6.9 stars out of 10. He appeared in the movie with Meryl Streep, Hugh Grant, Simon Helberg, Rebecca Ferguson and Nina Arianda among others.

Cameron Cuffe, the Krypton star, likes privacy when it comes to his personal life. Cuffe prefers to hide his relationships and dating life far from the limelight. So, only limited information about his dating life is available which suggest that he is leading a single life.

Some of his hobbies include traveling, diving, rugby, playing guitar, and football. Moreover, he is an animal lover.

He is a fitness freak and for his role in Krypton, he gained 15 pounds of muscles.

Here is the video, in which he talks about his TV series, Krypton: