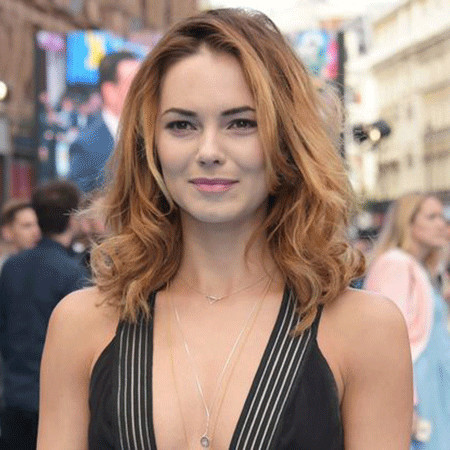 English actress, Kara Tointon is known for her role as Dawn Swann in the British soap opera EastEnders. She made her stage debut in the role of Brigitta in a production of "The Sound Of Music" at the Cliffs Pavilion.

Kara Tointon was born Kara Louise Tointon on 5th of August, 1983 in Basildon, Essex, England, under the births sign Leo.  She was brought up by her parents in Leigh-on-Sea along with her actress sister Hannah Tointon.

At the early age of seven, Kara Tointon was diagnosed with dyslexia. She attended St Michael’s School, Leigh, and St Hilda’s School along with her sister. She was confident and ambitious from an early age.

Kara Tointon began her acting career at the early age of seven. She had already started to attend speech and drama lessons at school. Her career as a professional actress took off when she played the part of Brigitta in The Sound of Music.

She also played a school friend of Sonia Fowler in her first television appearance East Enders (1994). Moreover, Kara Tointon also starred in BBC’s “Curriculum Bites” as a presenter in the year 2002.

She co-starred Joe Swash in Snow White and the Seven Dwarfs in Bristol. As a resemblance to her real life, Kara Tointon recorded a doc u mentary for BBC Three called Kara Tointon: Don’t Call Me Stupid. The program’s objective was to show an impact of dyslexia on people’s lives and how can people live with dyslexia.

Not the only actress, Kara Tointon is also a fabulous dancer. It was announced that she would be appearing as a contestant on Strictly Come Dancing Series 8 in September 2010. She partnered with Artem Chigvinstev.

Kara Tointon along with her partner Artem achieved good scores in the first five weeks. She made her journey to the finals and won the competition being crowned champion. Before her finals, she has given a raunchy photo shoot on a bikini that took place on a sunny beach in Spain.

She was declared as the new face of Michelle for George underwear at Asda in August 2009. Moreover, Kara Tointon took part in the BT Red Nose Desert Trek for Comic relief 2011.

She also played the part of Maria in The Sound Of Music Live in the UK for which she received fantastic reviews on her performance. Kara Tointon was ranked 1st in FHM’s 100 Sexiest Women in a poll of the year 2010 and 2011.

Tointon has been in a relationship with Notting Hill-based chiropractor Marius Jensen since April 2017 and engaged since March 2018.

Previously, she was in a relationship with James Alexandrou (April 2006-November 2007). She also dated Joe Swash (October 2008-May 2010). Once she had affairs with Russian dancer Matt Johnson.

Kara Tointon stands beautifully at the height of 5 feet and 5 inches. Her net worth has been estimated to be high acc u mulated from her salary as an actress and her investment in stocks, properties, and luxury goods.

To raise money for Share A Star, a charity set up to help severely unwell children and teenagers; Kara Tointon took part in the Great North Run in September 2014. The biography of the famous Kara Tointon can also be found in Wikipedia, Twitter, IMDb and more.