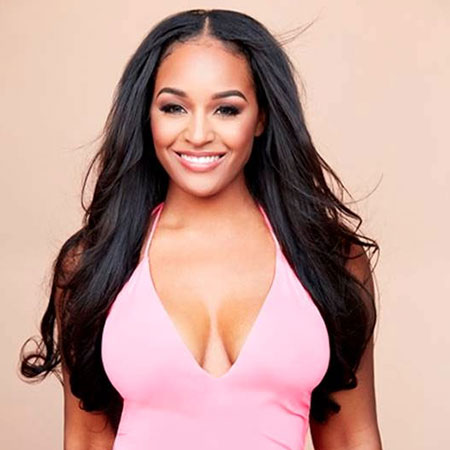 American actress and a reality TV personality, Brandi Maxiell is well- known for her appearances on the VH1 reality show Basketball Wives LA. She also owns a salon named ‘Midway Salon & Suites.’ Besides this, she is a social media star and has an incredible fan base on social media.

Brandi Maxiell was born Brandi M Duncan on 21th May 1983, in Dallas, Texas, United States, under the birth sign Gemini. Brandi Maxiell is an American by her nationality and belongs to African-American ethnicity.

Her parents separated when she was a small child. After that, she was raised by a single mother, Terri Duncan along with her sister, Jayde Penn. Her father owned a barbershop and aesthetics business.

Her grandmother taught her makeup lessons which later helped her establish the cosmetics business. Apart from that, she also went to church almost every day with her granny.

Talking about her education, she graduated from the University of North Texas in 2007. She majored in business.

Talking about her career, Brandi Maxiell works as an entrepreneur and inspirational speaker. Her first appearance on television was in 2010 when she played on the American doc u mentary series E! True Hollywood Story.

In 2015, she participated in the VH1 reality show Basketball Wives LA, where she shared her struggle with ovarian cancer. Eventually, Maxiell started receiving lots of love from audiences and soon she became a star.

In December 2016, she lost her grandmother with whom she was really close and after her demise, she was reluctant to go back to the show. The following year, she guest starred on Access Hollywood Live. Maxiell also found on the American talk show, The Arsenio Hall Show.

Apart from these, the American personality, Maxiell was also known as a successful businesswoman. She is the owner of Midway Salon & Suites and Brandi Maxiell Cosmetics.

Brandi Maxiell earns a good salary from brand endorsements deals and business. As of 2019, she has an estimated net worth of $2.5 million as per Bustle.com.

Moreover, Maxiell is the co-founder of 'Brandi Maxiell Cosmetics', which manufactures lipsticks and eyelashes which costs $18. Furthermore, she runs a salon called 'The Midway Salon & Suites'.

On the other side, her husband Jason Maxiell has an estimated net worth of $8 million. Jason is a former professional NBA player for the Detroit Pistons.

Brandi Maxiell is a married woman and has been happily married for over eight years. married the former NBA player, Jason Maxiell on August 1, 2010, in Denton County, Texas. The couple met when they were studying in high school.

Brandi Maxiell was just 24 when she was diagnosed with ovarian cancer. But after multiple chemotherapy treatments, she became cancer-free in 2008. Three years later, the lovebirds gave birth to their first child, a baby boy In November 2011.

Later, she organized charity events for ovarian cancer awareness and donated all the funds to the National Ovarian Cancer Coalition of Dallas. Maxiell has numerous fan following on social media especially on Instagram.

In September 2018, Jason attended an interview with his wife, Brandi where he confessed he was in a relationship with 341 girls. He added, 50 out of 341 were during their marriage. Soon after the confession, his wife walked off from an interview.

You May Like: Donya Fiorentino, Skyler Samuels, Eric Martsolf

Let's check out the short video of Brandi Maxiell