Brady Noon is an American child actor who gained his fame along with his twin brother Connor Noon in the television series Boardwalk Empire. The actor also got a lot of fame from the feature film Good Boys. With just one series and a feature film, he made his mark in the entertainment industry as an actor.

Brady Noon along with his twin brother Connor Noon was born on 30th December 2005 in Forked River, New Jersey, United States. He belongs to white ethnicity and holds the American nationality by birth. Brady was raised by his mother and father along with his twin brother and elder sister Madison Noon.

Just Appeared In One Television Series And Feature Film

Brady Noon made his acting debut from the television series Boardwalk Empire. He and his twin brother portrayed the role of Tommy Darmody in the television series. In the series, the actor worked along with Steve Buscemi, Kelly Macdonald, and Michael Shannon from 2010 to 2013.

With his fame from the Boardwalk Empire, he kickstarted his career as an actor from the feature film Good Boys in 2019. He played one of the three friends along with Jacob Tremblay and Keith L. Williams in the movie. The actor appeared in many television shows including Entertainment Tonight, Made in Hollywood, Extra with Billy Bush, and WGN Morning News. Noon will be appearing in the 2020 movie Marry Me along with Chole Coleman, Owen Wilson, and Jennifer Lopez. He is working in the television series The Might Ducks which will be released in the future soon.

What Is The Net Worth OF The Child Actor?

Brady Noon just made the sensation with just a feature film and television series not only that but also gather a decent fortune. He has an estimated net worth of $500,000, as of 2020.

His major portion of wealth is from his work as an actor. The average salary of an American actor is around $52,000 per annum.

Currently Focused On His Work And Studies

Brady Noon is just a teenage boy who has not even completed his high school. The actor is busy with his studies and career.

Being a child actor doesn't mean his interests are not like any other kids. He also loves to have fun when he has free time like any other usual kids. 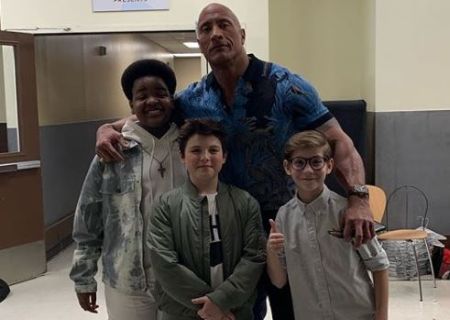 He loves to take photos with his favorite actor like Jason Statham, Dwayne Johnson, and Kevin Hart which he has shared on his Instagram.