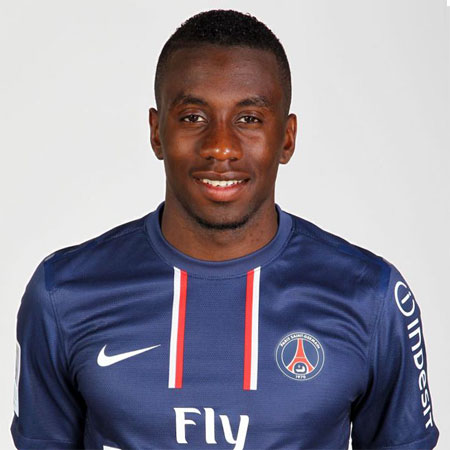 Blaise Matuidi is a French footballer currently playing in the position of a midfielder for the French team Paris-Saint Germain. Known best for his tackling skills this black player has made an impact in the football fraternity with his association with Troyes, Saint-Etienne and also for the French National football team.

Born to an Angolan father and French mother in Toulouse, Haute-Garonne, Matuidi was raised with four other siblings in the Parisian suburb of Fontenay-sous-Bois. Inspired into football by the current team he plays for, he played at the age of six for his hometown club. At the age of 11, he joined the CO Vincennois and was subsequently selected to attend the Clairefontaine academy owing to his skills. After three seasons there, Matuidi left Vincennes and signed a youth contract with Creteil. He turned down the signing offer by the defending champions Olympique Lyonnais to join Troyes owing to its training centre facilities.

Matuidi’s career with Troyes began with the reserve team in the Championnat de France Amateur 2. He made his professional debut on November 2004 in the team’s Ligue 2 match against Gueugnon after being called upon the senior team. For the 2004-05 season, he was reinstated to the reserve team whereby he helped the team finish in the sixth place. After the senior team of Troyes started playing Ligue 1 on a permanent basis, he was re promoted to senior team and appeared in 31 league matches subsequently. Matuidi’s first professional goal was on January 11, 2006 against Lille which was turned to a 1-0 victory.

Despite being called upon by English club Charlton Athletic, he signed a professional four-year contract with Troyes and appeared in 35 matches with a total of 3 goals. His card accumulation was also reduced from 11 to 6. His most notable goals were against Sedan, where he scored an equalizing and a winning goal one after the other.

On July 2007, Matuidi agreed to a four year contract with Saint-Etienne in spite of being linked with Bordeaux, Lille and AS Monaco. His debut was on August 2007 against Valenciennes. The club was qualified that season to the UEFA Cup. Matuidi’s first career goal was a win against Sochaux in August 2008. This made him a sought after player by Arsenal and Milan. His first European debut was on September in the UEFA Cup against Hapoel Tel Aviv. He made eight appearances in the UEFA that season. Despite the club suffering from a broken collective and near relegation, he was signed in as captain for the 2009-10 season. Under his leadership, Saint-Etienne defeated the defending champions Bordeaux. Following a physical altercation with team mate Dimitri Payet, both players were subsequently called up into the French National Team.

Matuidi signed a three-year contract with Paris Saint Germain on July 2011. His salary for it was supposed to be 7.5 million Euros, plus incentives. No.14 shirt was assigned to him and his club debut was against in a defeat with the New York Red Bulls at the Emirates Cup. Matuidi’s competitive debut was against Lorient. As of February 2014, he was sogned into a four year contract extension.

Matuidi’s contributions also lie as a French youth international having represented his nation at under-19 and under-21 level. His youth international debut was against Norway in a friendly match. He finished the campaign after playing for the team in qualifying matches for the 2006 UEFA European Under-19 Football Championship with nine appearances and no goals.

For the under-21 team he featured in qualifying matches for the 2007 and 2009 UEFA European Under-21 Football Championships. His under-21 career ended with the team’s defeat to Germany. Prior being called up in the French senior team, he didn’t appear on international grounds for almost two years. Matuidi featured in the UEFA Euro 2012 qualification matches against Belarus and Bosnia and Herzegovina. This player scored his first international goal in a friendly match, a win against Holland national football team on 5 March 2014. The goal was an awesome scissor kick.

This 27 year old has a height of 1.75 m and a weight of 70 kg. He is best known for his ball tackling, handling and speeding skills. Matuidi’s best foot is his left and his net worth is estimated to be 17,60 million Euros. Players like him are talked about more with regard to their performances in football rather than their personal life issues. So, there is not much known about his relationship and social media status. However what can be adequately said is that, at a young age of 27, Matuidi has managed a huge football fan following who are inspired by his contributions and hard work for his club and nation.