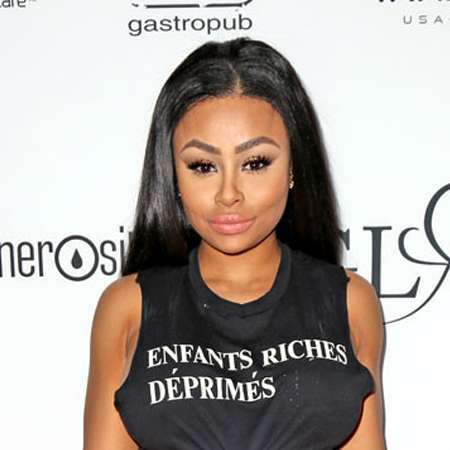 American model and entrepreneur Blac Chyna is stepping out of the Kardashians’ shadow for her own reality show. She began her career as a strip model when she was still in college. She made headlines when she appeared in Kanye West’s song Monster in 2010.

She then became more popular after began her dramatic relationship with rapper Tyga and Kim Kardashian’s brother Rob Kardashian. She has two children; a son and a daughter with them. She is dating YBN Almighty Jay as of August 2018.

Blac Chyna was born as Angela Renée White was born on 11 May 1988, in Washington, DC, United States. She was born to her father Eric Holland and her mother Shalana Hunter. She is famous for her nickname Blac Chyna in the showbiz industry.

She was pa s sionate about social media since her childhood. She began stripping to pay her college fee. She enrolled at Johnson & Wales University but she did not attend most of her cla s s lectures for stripping. Eventually, she dropped out of college and entered modeling.

Chyna started her career journey as a strip dancer while she was still in her college. After dropping out of the University, she focused on modeling. While she was at a popular Miami club, her exotic look made her famous.

Her popularity led to modeling jobs on the covers of numerous fashion magazines like Straight Stuntin, Diempiece, and Black Men Magazine. In 2010, she appeared in the music video of Kanye West’s track Monster featuring Nicki Minaj, Jay-Z, and Rick Ross.

In February 2013, she enrolled in JLS Professional Makeup Artist School. In December 2013, she launched her online boutique entitled 88fin- filled with new clothing and products from her clothing line of the same name.

That same month, she launched her own brand of adhesive eyelashes called LASHED by Blac Chyna. In February 2014, she bought a bar in Encino Los Angeles.

American model and entrepreneur Blac Chyna is one of the richest models in Hollywood. She earns a significant amount of net worth from her career. According to a source, her net worth is $4.0 million as of August 2018. Here is the list of her various income sources and a s sets below.

Her net worth increased from $1.5 million to $4 million after her a s sociation with the Kardashians. She also received $20,000 a month in child support for his daughters from her ex-fiance Rob Kardashian. Chyna also earns a hefty amount of money from her clothing line.

Blac Chyna is an unmarried woman. She is in a relationship with a young rapper YBN Almighty Jay for some time.  In May 2018, she announced that she was expecting her third child with her new boyfriend.

She previously was in a relationship with a few men including Tyga and Rob Kardashian. In 2011, Tyga asked her to join him on tour 2011, but she refused. In 2012, she appeared in his video Rack City and started dating him.

On 16 October 2012, the duo welcomed their first son Cario together. Reportedly, the couple split up in 2014 when he was linked to Kylie Jenner. Later, she began dating Kylie Jenner’s half-brother Rob Kardashian in 2016. The couple engaged in April 2016. She welcomed their daughter Dream Renee Kardashian on 10 November 2016.

After a month, Kardashian announced on his Instagram that he and Chyna were no more couple. They reconciled a few days but called off their engagement in February 2017. She is raising her two children with her new boyfriend.

In 2014, she dispatched her own make-up brand Lashed by Blac Chyna, with a wonder salon in Encino, Los Angeles. Blac Chyna was conceived by Angela Renée White in Washington, D.C.

Her dad was an architect and her mother was functioning as a vendor. Her dynamic year began in 2008 from that point forward she is achieving a top position of achievement in her expert vocation. Since her folks got separated later on she began living with her mom.

Alongside stripping in 2010, Chyna started urban displaying. Chyna was previously called the "Cream" yet later named herself "Blac Chyna" after she met a customer at the strip club she worked at who called himself Black China since he was a dark person with Chinese-looking eyes.

In September 2010, Chyna postured for the front of Dimepiece magazine. That same month, Chyna postured in Straight Stuntin' Magazine and Black Men's magazine. During the year 2010 of November, Chyna was enrolled to a s sume the part of rapper Nicki Minaj's trick twofold in the music video for Kanye West's "Beast" including Jay-Z, Rick Ross, and Nicki Minaj.

In November 2011, Blac Chyna was given a role as the fundamental female part for rapper Tyga's single "Rack City. Similar to this during February 2012, Chyna postured for the July release front of Black Men's magazine. That same month, Chyna acted in XXL Magazine like Eye Candy of the Month.

Chyna met rapper as her partner about to get married Tyga on October 5, 2011, at The F.A.M.E Tour After Party with Chris Brown while working at King of Diamonds in Miami and 007 in Detroit. As per Chyna's Twitter channel, their relationship authoritatively started on November 9, 2011, while shooting the music video for Tyga's hit single "Rack City" They were often seen together out in the open at venues like clubs and ball games.

In March 2012, the couple postured for the front of Urban Ink Magazine. That same month bits of gossip began to course that Blac Chyna was pregnant. Their child, King Cairo Stevenson, was conceived on October 16, 2012.

In January 2016, Blac Chyna started dating Robert Kardashian, Jr. On April 5, 2016, the couple reported their engagement through Instagram following three months of dating. On May 6, the couple declared they were expecting their first kid together and planning to live a happy life with their children.

Blac Chyna is a tattoo lover and has inked most of the part of her body. She has more than 20 tattoos on her body. A few of her tattoo shapes are listed below.