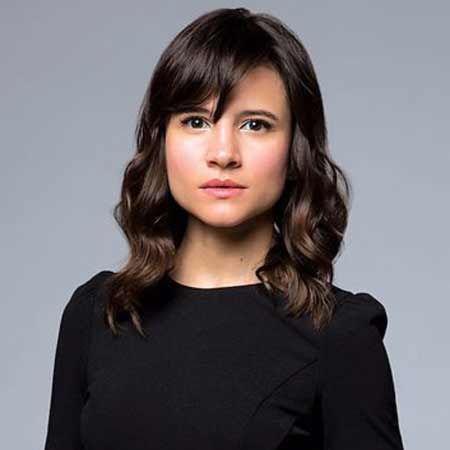 Bianca Comparato is a Brazilian actress who came to the limelight for her role Michele Santana; a naive young woman with a strong sense of justice in the dystopian thriller web series 3%. In 2016, she portrayed the role Carmen Teresa in the Brazilian movie Somos tão Jovens which was based on the life of singer Renato Russo for which she won the Grande Prêmio do Cinema Brasileiro as Best Supporting Actress. Besides, she has also appeared in a few other critically acclaimed movies including Como Esquecer and A Menina sem Qualidades.

Bianca was born on November 19, 1985, in Rio de Janeiro to Doc Camparato under the birth sign of Scorpio. Her father is a popular writer known for working in the Television series and Theaters including Lampião e Maria Bonita, Plantão de Polícia, and Nadistas e Tudistas. Her sister Lorena Comparato is an actress and TV host. Bianca holds Brazilian nationality and belongs to mixed Ethnicity.

Comparato attended British School of Rio de Janeiro, and for her dedication in the theatre course she was awarded a three-month course at the Royal Academy of Dramatic Arts in London, she, however, quit school and returned to Brazil. She graduated in the year 2010 from the film school at PUC-RJ.

Comparato initiated her Broadway career from O Ateneu directed by Leonardo Bricio and made her television debut in 2004 from the series Crago Pesada. The same year she appeared in Senhora do Destino.

Later in 2005, she portrayed Maria João in Brazilian telenovela TV Globo's Bellissima. The same year she made an appearance in Cabras & Lagartos and also in the short movie Pedro, Ana e a Verdade. She was also featured in the 381st edition of Playboy Magazine.

Bianca was then featured in several hit miniseries and plays including Toma Lá, Dá Cá, Beleza Pura, As Brasileiras and Tapas & Beijos. In 2013, she played the role named Carmem Teresa in the movie Somos tão Jovens which was based on the popular Brazilian singer Renato Russo. Her performance was highly appreciated, and she even won Grande Prêmio do Cinema Brasileiro for Best Supporting Actress.

Bianca Comparato gained international fame after she appeared in the dystopian thriller web television series 3% as Michele Santana, alongside Michel Gomes, Rodolfo Valente, Vaneza Oliveira among others. She plays the main protagonist in the show; a young woman with a strong sense of justice with no family and was raised by his brother. It is the first Portuguese-language Netflix original series.

Bianca Comparato's Net Worth And Salary

Bianca Comparato's net worth is expected to be close to millions at present. She has earned a decent amount of salary from her career.

Camparato has been in the acting field for many years, and along with fame and success, she has also earned a good fortune. Her net worth is estimated to be in millions, but the actual amount is still under review. She is also involved in several endorsements which adds more to her value.

Bianca Camparato is possibly single. No rumors of her boyfriends or affairs have been heard. She is focused on her work and tries to maintain a low-key personal life. She is active in social media especially Instagram where she posts her gorgeous selfies and promotes work.